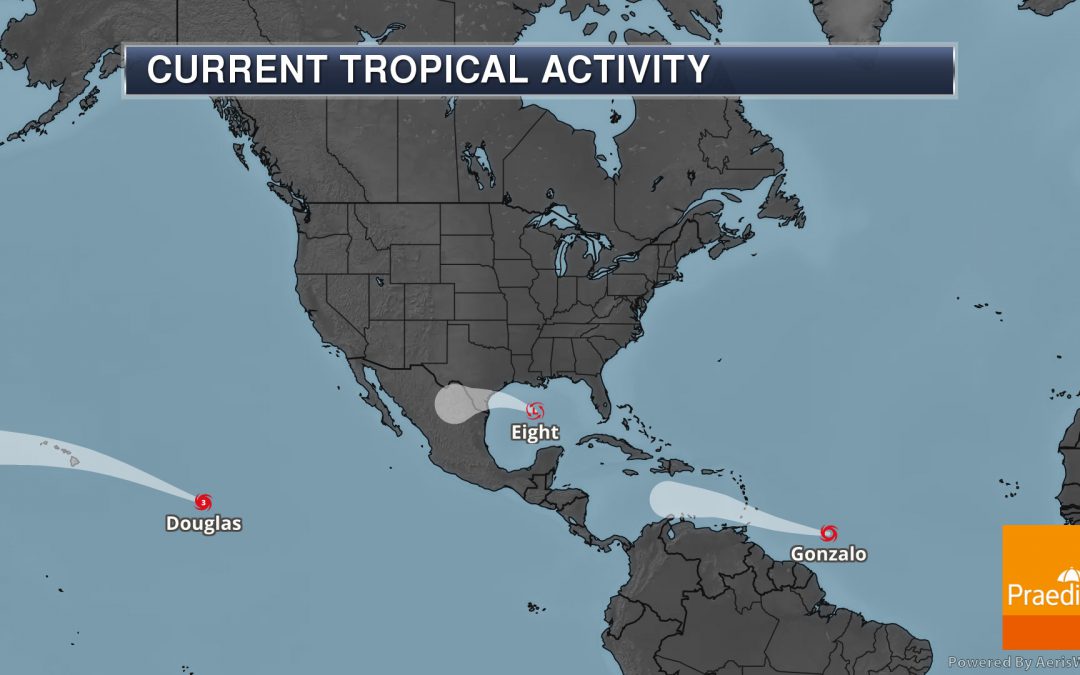 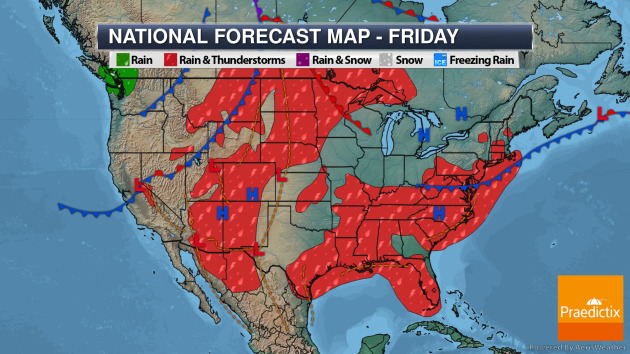 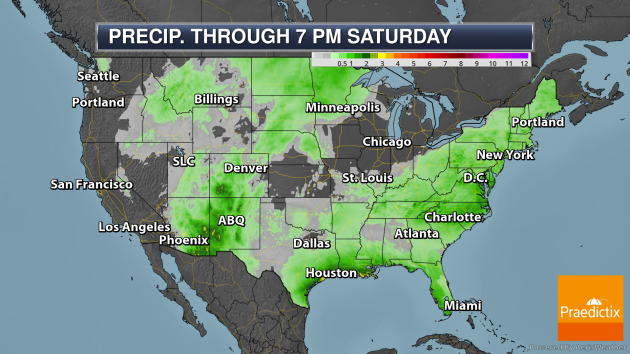 As we look at rainfall through Saturday evening, we are watching two areas across the nation where over 3″ could fall. The first is along the Gulf Coast due to Tropical Depression Eight. The second is in portions of the Southwest with monsoonal moisture. 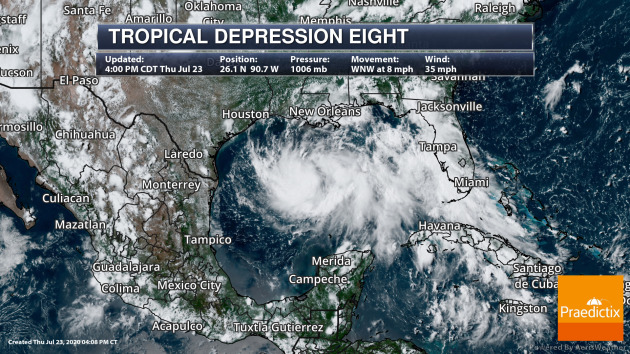 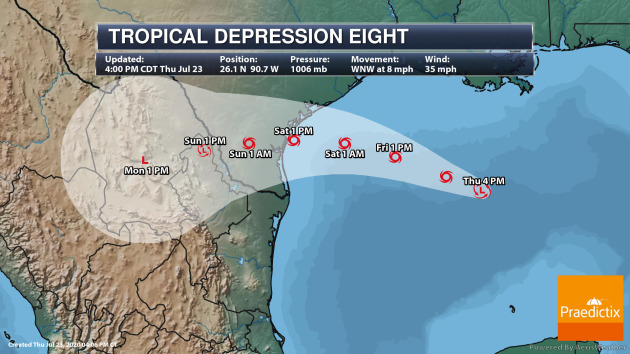 Tropical Depression Eight formed in the Gulf of Mexico Wednesday Night and has slowly gotten better organized Thursday. As of the 4 PM CDT update, Eight had winds of 35 mph. It is forecast to become a tropical storm (named Hanna) before landfall along the Texas coast Saturday. Tropical Storm Warnings were in place from Port Mansfield to San Luis Pass, TX, with Tropical Storm Watches from San Luis Pass to High Island, TX. 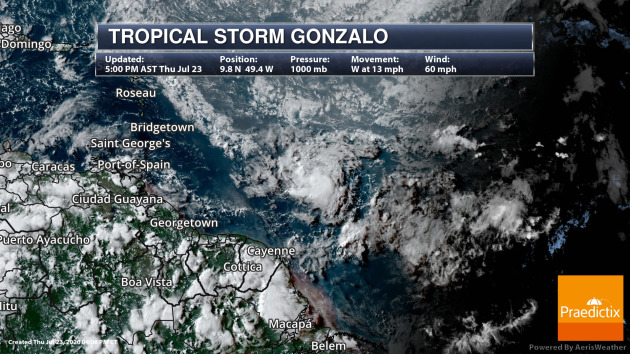 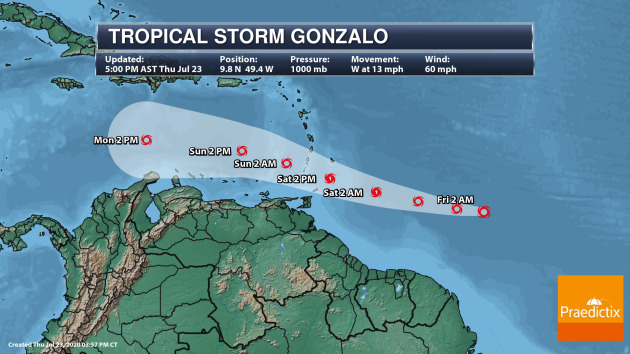 As of late Thursday afternoon, Gonzalo was still a tropical storm moving westward across the Atlantic. The 5 PM AST update had Gonzalo with winds of 60 mph. There is a greater than average uncertainty in the strength forecast over the next few days, but it could still reach hurricane strength as it approaches the Windward Islands this weekend. It is expected to dissipate about five days out while moving through the Caribbean. Hurricane Watches are in place for Barbados and St. Vincent and the Grenadines, with Tropical Storm Watches for Tobago and Grenada. 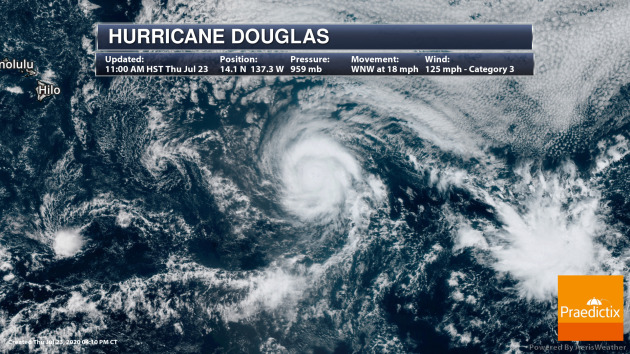 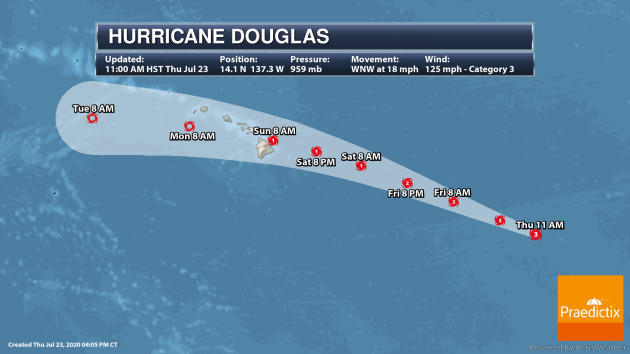 Douglas in the Pacific has strengthened into a major hurricane with wind speeds of 125 mph. While gradual weakening is expected to start Friday, this system could impact Hawaii as a strong tropical storm or Category 1 hurricane late this weekend.

More from LiveScience: “Deep inside the Earth, liquid iron is flowing and generating the Earth’s magnetic field, which protects our atmosphere and satellites against harmful radiation from the sun. This field changes over time, and also behaves differently in different parts of the world. The field can even change polarity completely, with the magnetic north and south poles switching places. This is called a reversal and last happened 780,000 years ago. Between South America and southern Africa, there is an enigmatic magnetic region called the South Atlantic Anomaly, where the field is a lot weaker than we would expect. Weak and unstable fields are thought to precede magnetic reversals, so some have argued this feature may be evidence that we are facing one.”

How You Can Help Save the Fireflies

More from Lifehacker: “If you’ve noticed that your backyard doesn’t seem to glow with the twinkle of fireflies as much as it used to, you’re right: It likely doesn’t. Fireflies are disappearing from fields, marshes and forests all over the world. The data might not be there to show the decline quantitatively, but the empirical evidence is there. Christopher Heckscher, an entomologist at Delaware State University, told USA Today that he has hunted rare fireflies, and there are some described by entomologists in the early 20th-century that he can’t find—including a firefly that was commonly found in the Brandywine River watershed, a part of the Delaware River watershed in New York, Pennsylvania, Delaware and New Jersey.”

More from the New York Times: “The Trump administration on Wednesday made public the federal government’s first proposal to control planet-warming pollution from airplanes, but the draft regulation would not push the airlines beyond emissions limits they have set for themselves. President Trump is still pressing forward on his three-and-a-half-year rollback of environmental standards, and the proposed airline rule would stave off an impending lawsuit by putting the federal government in compliance with a legal requirement that it regulate airplane greenhouse emissions.”