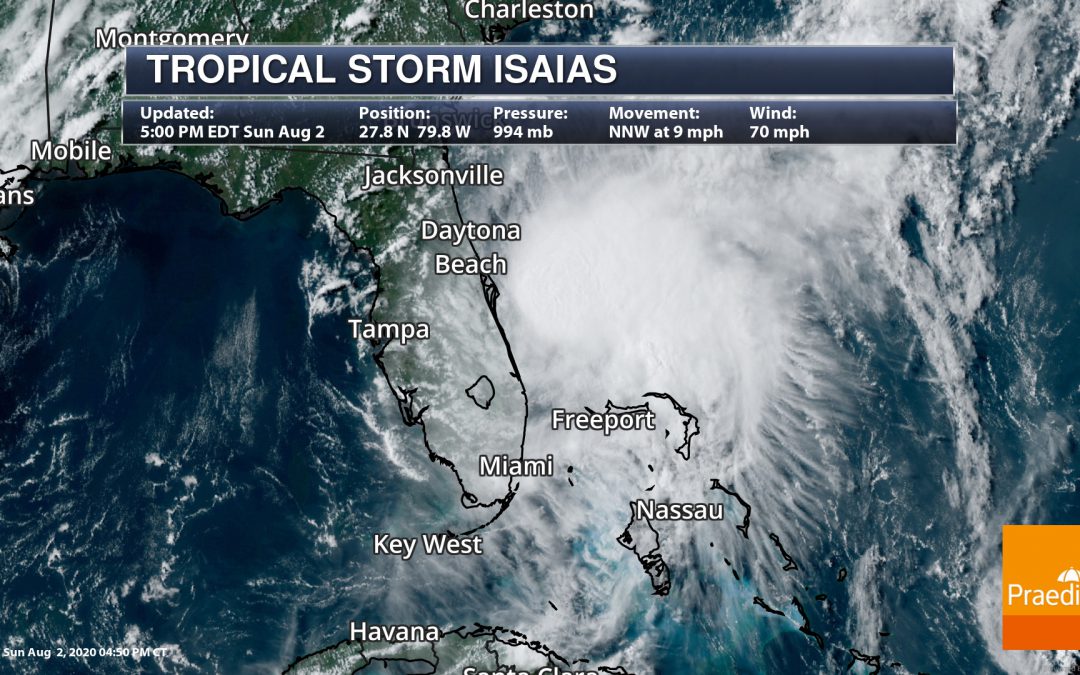 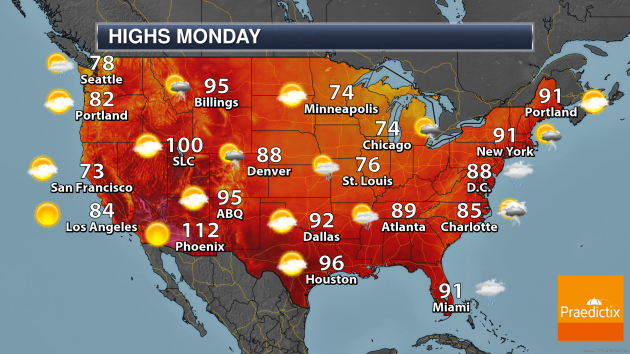 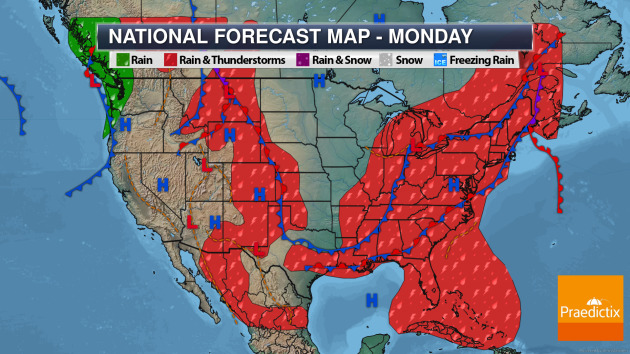 On Monday, we will continue to track Isaias off the Southeast Coast, potentially making landfall Monday Night (more on that below). A boundary in the eastern United States will help produce showers and storms, with another cold front and area of low pressure in the Great Lakes and Ohio Valley. A cold front moving into Montana will produce storms, with afternoon storms along the Front Range into New Mexico. 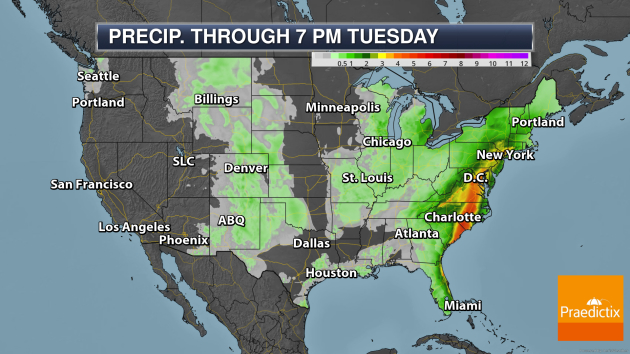 The heaviest rain through Tuesday evening will be in the eastern United States along the track of Isaias. In those areas, at least 3-5″ of rain could fall. 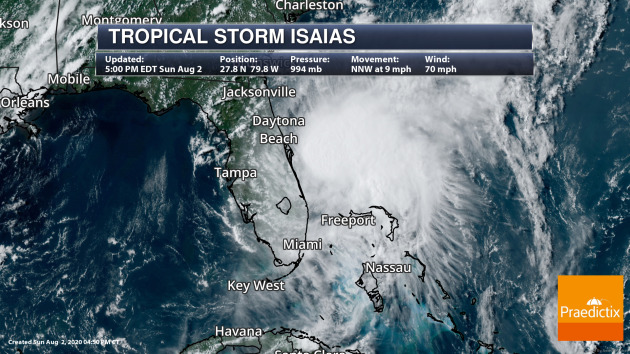 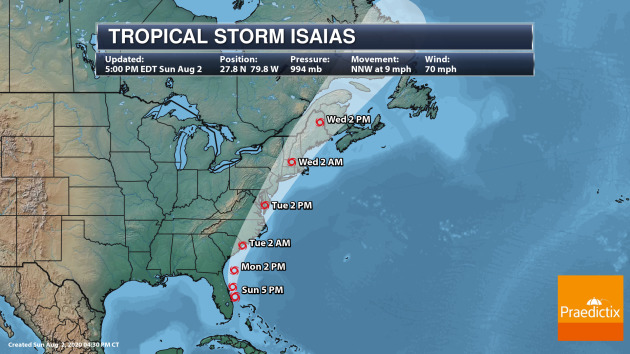 Tropical Storm Isaias re-strengthened a touch off the eastern Florida coast on Sunday. As of the 5 PM EDT update, the center of the storm was located about 65 miles southeast of Cape Canaveral, FL, and moving north-northwest at 9 mph. The storm had sustained winds of 70 mph. 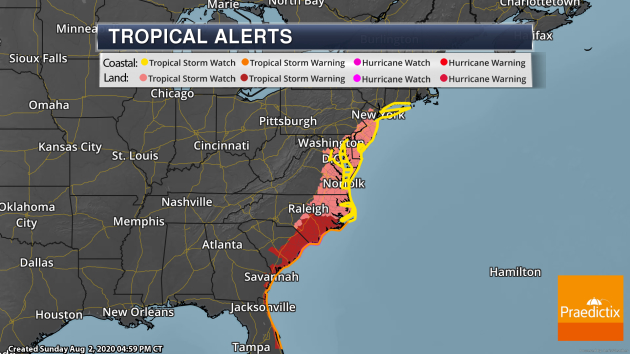 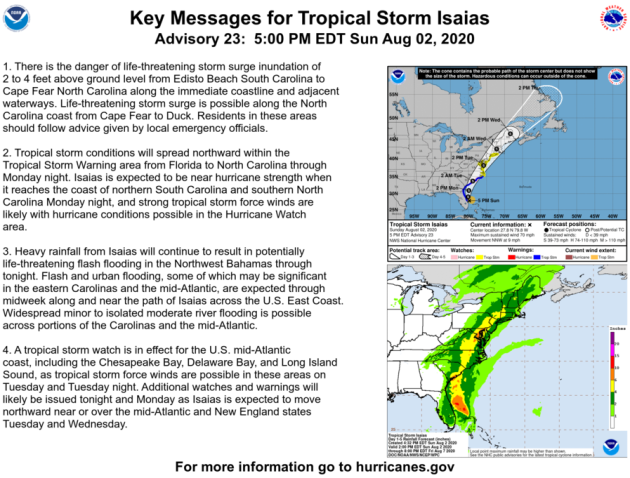 Isaias will continue to bring the threat for life-threatening storm surge, tropical-storm and hurricane-force winds, and heavy rain and flash flooding to the eastern United States through the first half of the week. 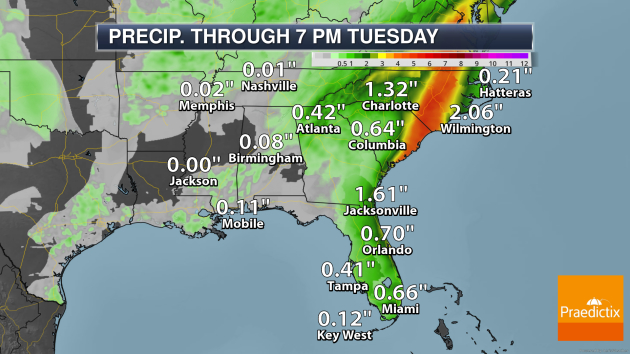 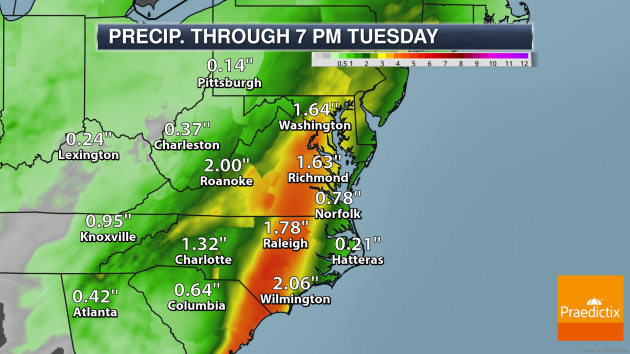 Here’s a look at some of those heavy rain totals from the Southeast through the Mid-Atlantic through 7 PM Tuesday. Some areas could see up to 8″ of rain which could lead to flash flooding.

More from NBC News: “Scientists and environmental groups have expressed alarm after new data revealed there were 28 percent more fires in Brazil’s Amazon rainforest this July compared with the same time last year. Satellite images released by Brazil’s space research agency INPE on Saturday revealed 6,803 fires in the Amazon last month. There were 5,318 in July 2019. “I am super concerned,” Erika Berenguer, an Amazon ecologist and a senior research associate at Britain’s University of Oxford, told NBC News Sunday. Adding that she “alarmed by the numbers,” she said that July was the beginning of “burning season” when areas which have been deforested have to be burned to clear the land.”

Climate change is bad news for your beach vacation

More from the Washington Post: “For almost as long as people have been building near beaches, they have been protecting those buildings with sea walls. These barriers, which deflect strong waves and prevent coastal erosion, were constructed around ancient Roman harbors and medieval British cities. Archaeologists in Israel have even uncovered evidence of a 7,000-year-old rock wall constructed in the aftermath of the Ice Age to hold back rising oceans as the world defrosted. But modern, human-caused climate change is escalating the threats that make sea walls necessary. Sea levels are rising, putting communities at greater risk from floods. Storms are intensifying, causing more and more sand to erode from beaches. Cities such as New York, Boston and Miami — as well as smaller, beachfront communities from California to Cape Cod — could lose thousands of homes and suffer billions of dollars in damage if they don’t find a way to hold back the water.”

It Was 125 Degrees in Baghdad This Week