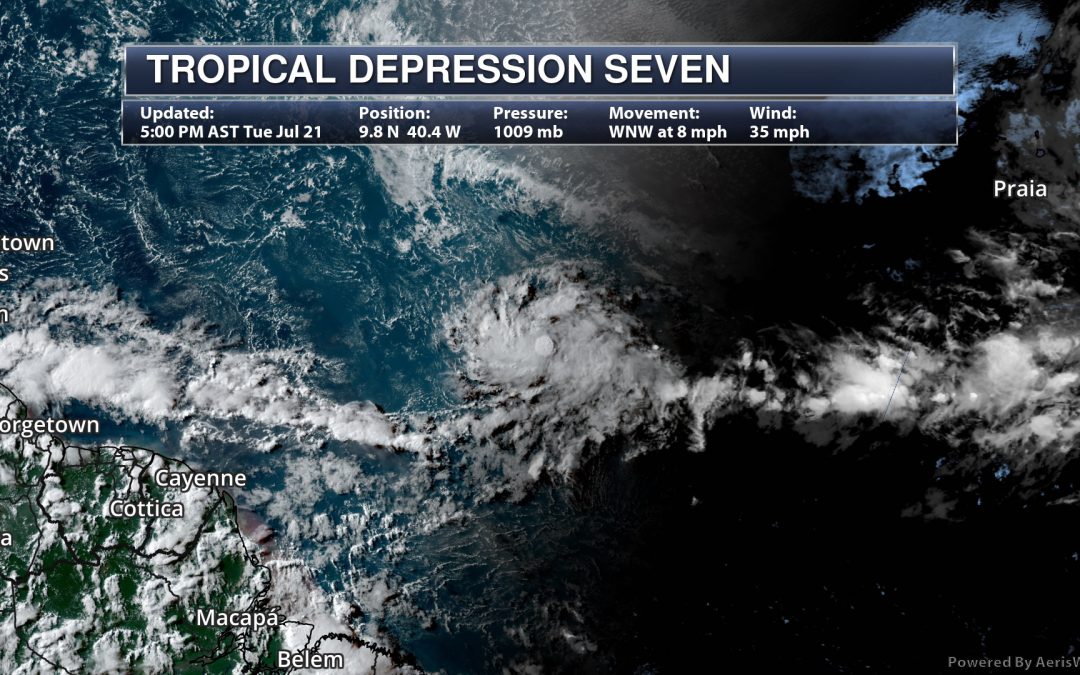 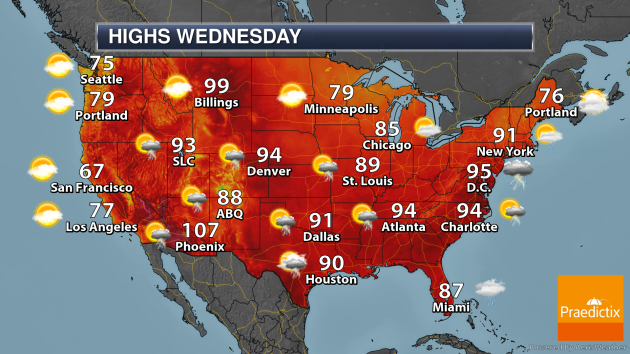 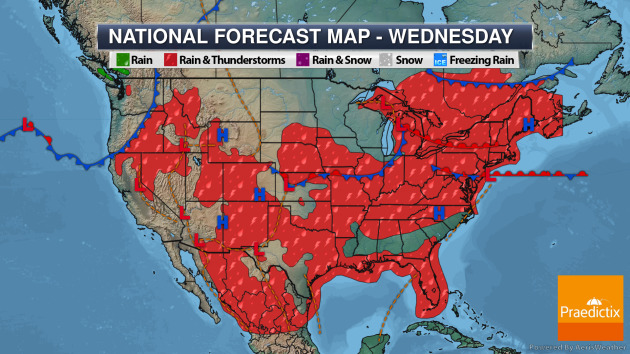 As we head through Wednesday, a system pushing through the Great Lakes will cause showers and thunderstorms from the Central Plains into the Northeast. A tropical wave could cause some showers along portions of the eastern Gulf Coast into southern Florida. Typical summertime afternoon storms are possible out in the western mountains and the Southeast. 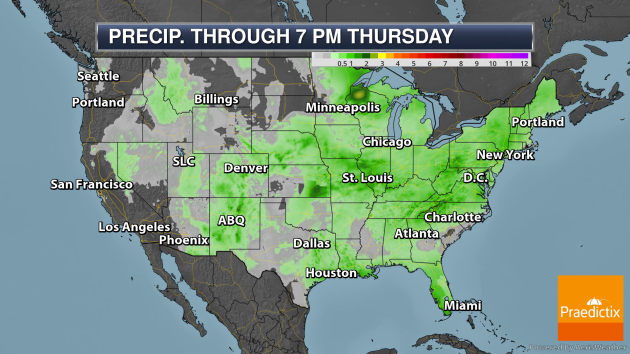 A few pockets of heavy rain are possible through Thursday evening across the central and eastern portions of the nation, where at least 1-3″ of rain could fall.

Tropics Heating Up A Touch 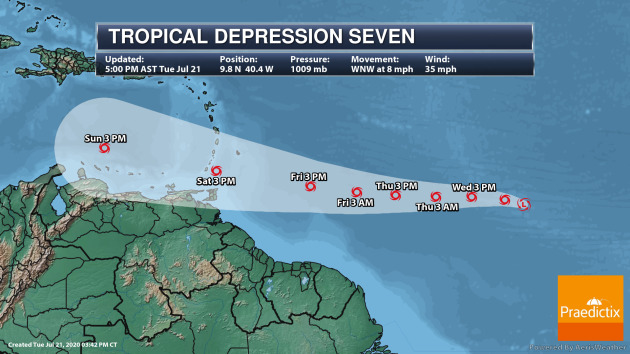 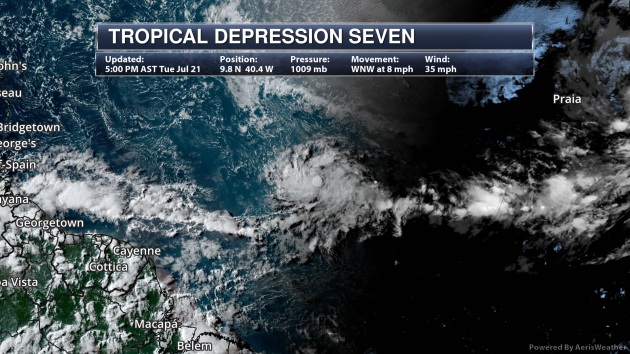 Late Tuesday afternoon, Tropical Depression Seven formed about midway between the Windward Islands and Africa in the Atlantic. This system will move west over the next several days, slowly gaining strength through the end of the week before some weakening occurs. 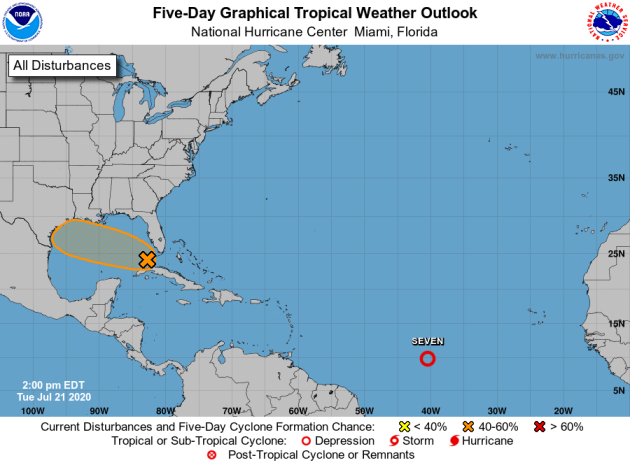 Meanwhile, we’re tracking another tropical wave near Cuba that has a 40% chance of becoming a tropical system as it enters the Gulf of Mexico through the middle and end of the week. 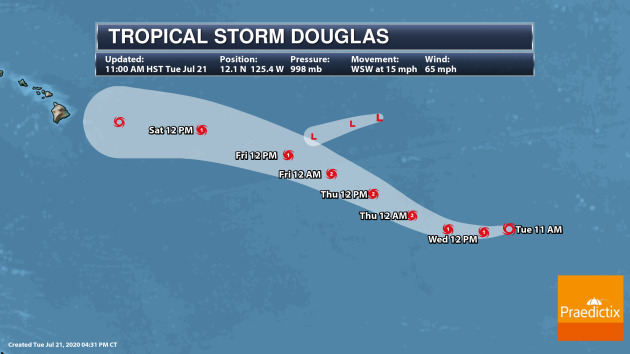 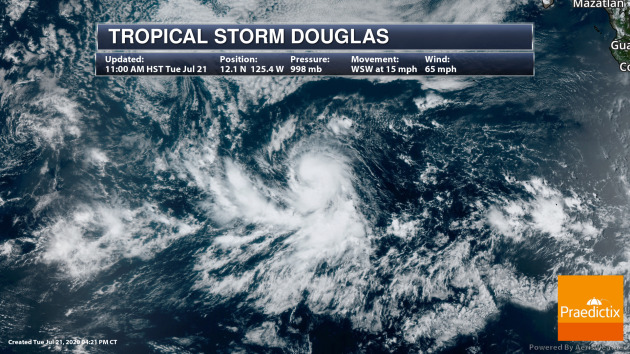 Out in the Pacific, Tropical Storm Douglas continues to strengthen and could become a hurricane later Tuesday. As of the 11 AM HST update, Douglas had winds of 65 mph. Douglas will move west to west-northwest over the next several days at hurricane strength, but it is expected to weaken back to a tropical storm this weekend. This storm could approach Hawaii late this weekend or early next week.

More from the BBC: “China has raised the flood alert level on a river in the east of the country after days of heavy rainfall. Officials have moved the alert warning on the Huai river from Level III to Level II, the second-highest tier, amid fears of further torrential downpours. Heavy rains have swept across China for weeks, from the southwest to the east coast. At least 14 people have reportedly died in the south of the country due to the flooding. Millions have been evacuated and thousands of troops have been deployed across the country to help shore up defences.”

Using techniques from astrophysics, researchers can forecast drought up to ten weeks ahead

More from Science Daily: “Researchers at the University of Sussex have developed a system which can accurately predict a period of drought in East Africa up to ten weeks ahead. Satellite imagery is already used in Kenya to monitor the state of pastures and determine the health of the vegetation using a metric known as the Vegetation Condition Index. These are conveyed to the decision makers in arid and semi-arid regions of Kenya through drought early warning systems. However, these systems, operated by the National Drought Management Authority (NDMA), only allows organisations and communities to intervene when the impacts of a drought have already occurred. By that point, such extreme weather would already have had a devastating effect on the livelihood of local people.”

How Many Polar Bears Will Be Left in 2100? If Temperatures Keep Rising, Probably Not a Lot

More from Inside Climate News: “Researchers have long known that polar bear populations will almost certainly suffer as a result of climate change. But a new study projects that by the end of the century, the bears may exist only in a few subpopulations in the northernmost region of their range. The study, published Monday in the journal Nature Climate Change, is the first to offer specific estimates of where polar bear numbers are likely to decline over time, and what demographic characteristics may make bears more vulnerable.”