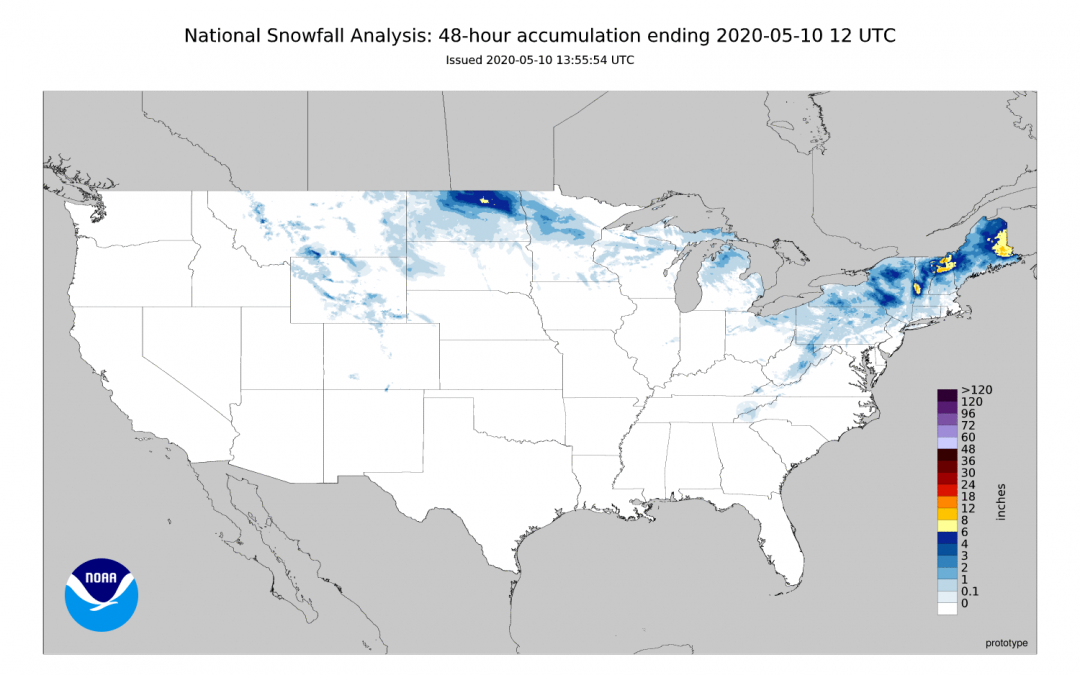 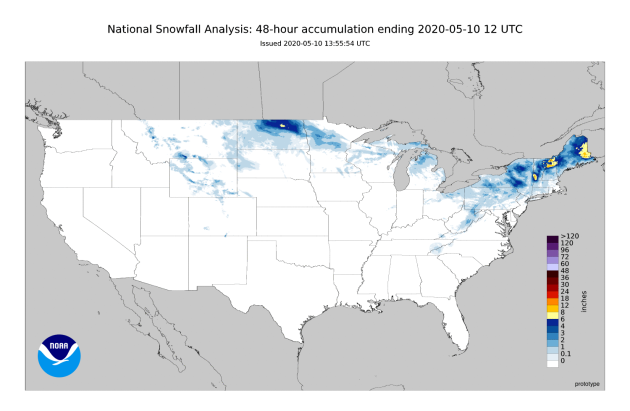 Here’s a look at snow across the lower 48 over the past 48 hours ending Sunday morning. At least several inches of snow have fallen from Montana to Maine, with a foot or more in portions of New England. The top snow amount has been 15″ out of Orient, ME. 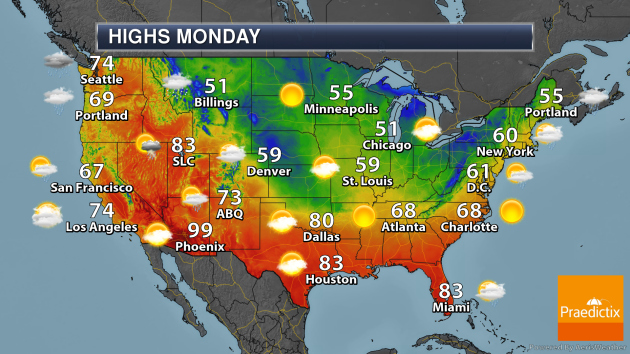 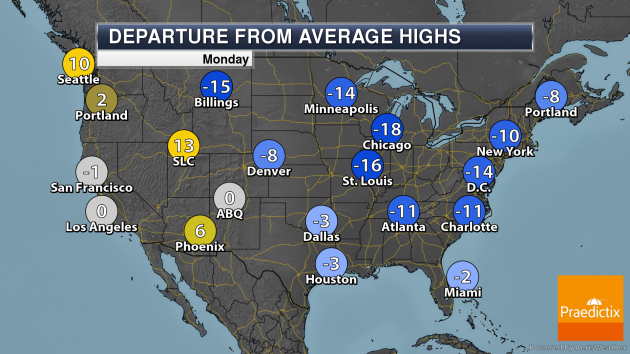 As we roll into Monday, an area of low pressure in the Northeast will produce some rain and – across mainly the Great Lakes and Appalachians – some morning snow. Rain chances will continue across southern Florida. A system near the Rockies will produce showers and storms from Idaho to Texas and the Central Plains, with some snow possible in the morning from Montana to Nebraska. A system approaching the West Coast will bring rain from the Pacific Northwest to the Bay Area. 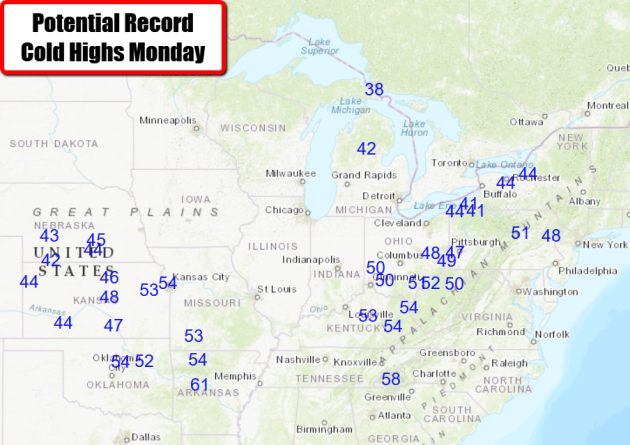 Numerous record cold highs are expected on Monday from the Central Plains to the Northeast. 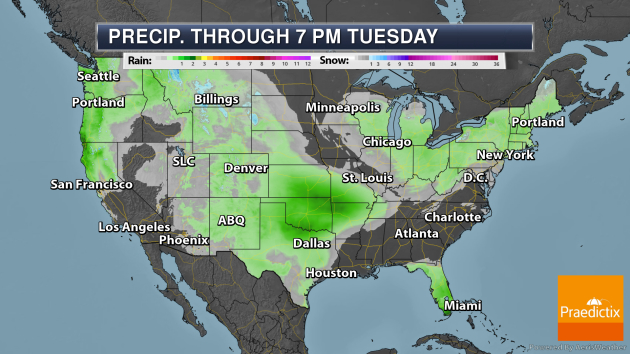 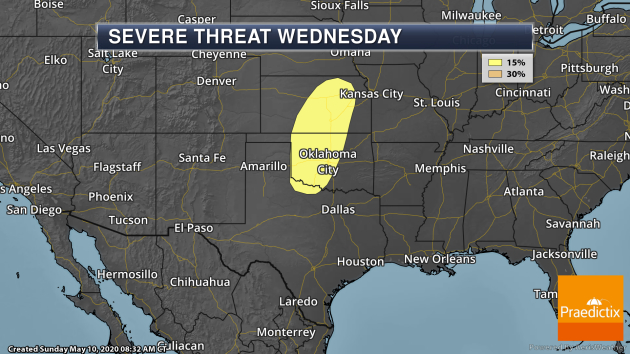 As we head toward Wednesday. the severe weather potential is expected to increase across portions of the Central and Southern Plains as a system works its way eastward. Right now all modes of severe weather are possible Wednesday into Wednesday Night from central Kansas south into far northern Texas, including areas like Oklahoma City, Wichita, and Wichita Falls. 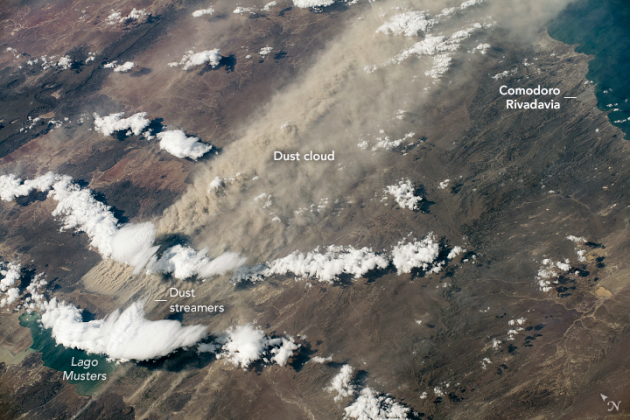 Image Information: “Astronaut photograph ISS062-E-85589 was acquired on March 7, 2020, with a Nikon D5 digital camera using a 170 millimeter lens and is provided by the ISS Crew Earth Observations Facility and the Earth Science and Remote Sensing Unit, Johnson Space Center.”

More from NASA: “A surging dust storm and trailing dust cloud captured an astronaut’s attention as the International Space Station (ISS) was passing over South America. Dust storms are common in Patagonia and familiar for people in Comodoro Rivadavia, a coastal city in southern Argentina. The primary source of dust is Lago Colhué Huapí, a shallow lake adjacent to the much deeper Lago Musters. During Patagonia’s dry season, the water levels of Colhué Huapí drop significantly due to evaporation, leaving loose silt exposed at the surface. In this photograph, the lake is almost entirely obscured by dust and clouds. At the western margin of the storm, dust lifted off from the ground in the form of dust streamers, which were aligned with the wind direction. These surface dust features are also observed on Mars.”

Humidity and heat extremes are on the verge of exceeding limits of human survivability, study finds

More from the Capital Weather Gang: “Welcome to “Steambath Earth,” featuring sauna-like temperatures and humidity too high for humans to tolerate. Extremely humid heat that is more intense than most Americans have experienced — approaching a crucial, immovable human survivability limit — has more than doubled in frequency in some coastal subtropical regions of the world since 1979, according to a study published Friday. The study is the first to find that wet-bulb temperatures of 95 degrees Fahrenheit (35 Celsius) — which render ineffective the human heat response of sweating to shed heat through evaporation, leading to hyperthermia — are already occurring for short periods of time at a few weather stations. These tend to occur in parts of the Persian Gulf shoreline and coastal southwest North America, where sizzling lands border sultry seas, as well as in northern South Asia, where extreme heat and humidity combinations overlap just before the annual monsoon season begins.”

How Climate Change Is Contributing to Skyrocketing Rates of Infectious Disease

More from ProPublica: “Over the past few decades, the number of emerging infectious diseases that spread to people — especially coronaviruses and other respiratory illnesses believed to have come from bats and birds — has skyrocketed. A new emerging disease surfaces five times a year. One study estimates that more than 3,200 strains of coronaviruses already exist among bats, awaiting an opportunity to jump to people. The diseases may have always been there, buried deep in wild and remote places out of reach of people. But until now, the planet’s natural defense systems were better at fighting them off. Today, climate warming is demolishing those defense systems, driving a catastrophic loss in biodiversity that, when coupled with reckless deforestation and aggressive conversion of wildland for economic development, pushes farms and people closer to the wild and opens the gates for the spread of disease.”