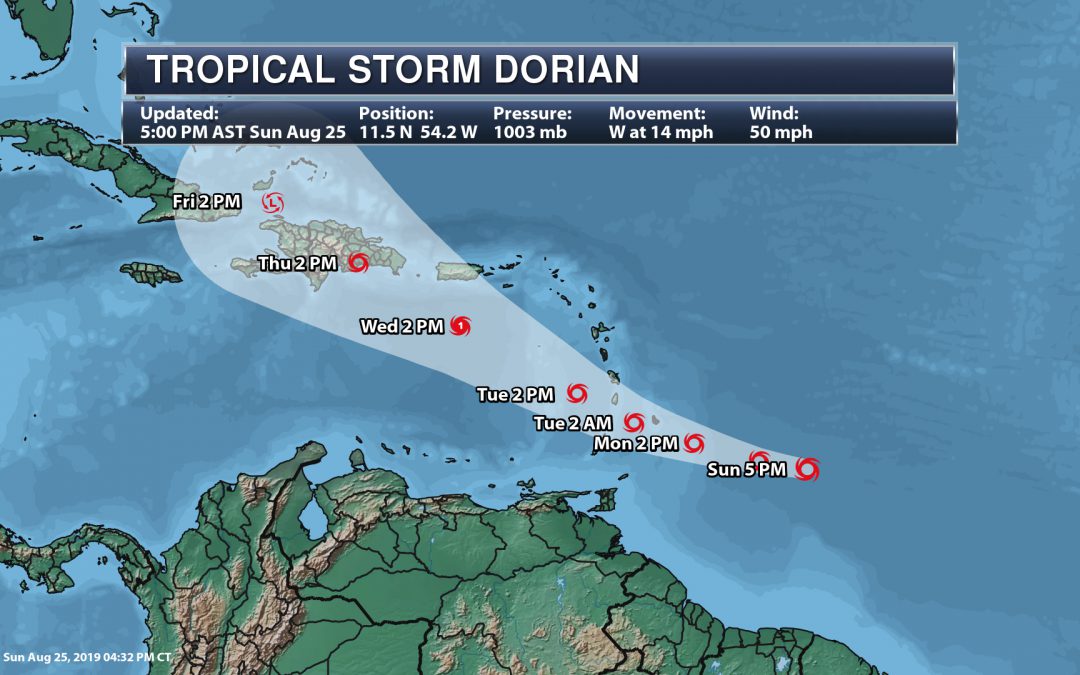 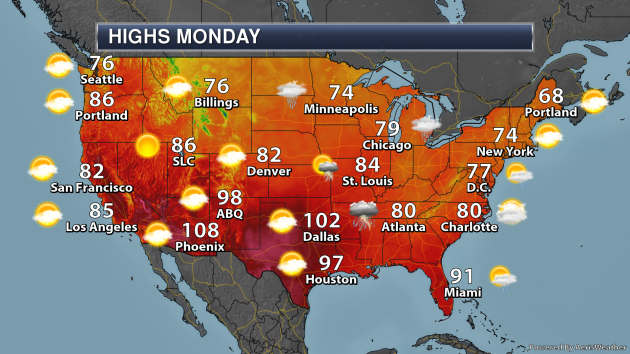 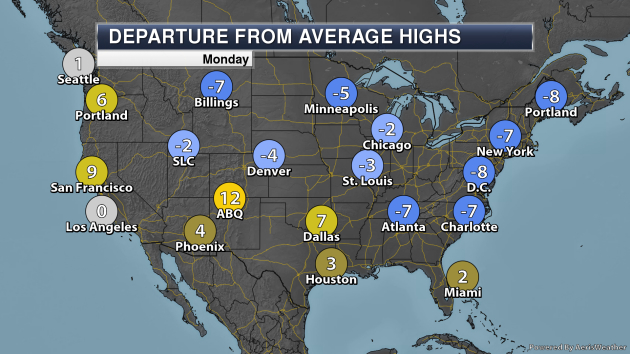 On Monday, a cold front approaching the Upper Midwest will help spark showers and t-storms across the region, some of which will be capable of heavier rain at times. A lingering boundary across the Southeast will also allow for heavier showers and t-storms. Summertime heat will continue across portions of the South and Southwest, meanwhile, highs will be below average from the northern Rockies across the upper Midwest to the Northeast and Mid-Atlantic. 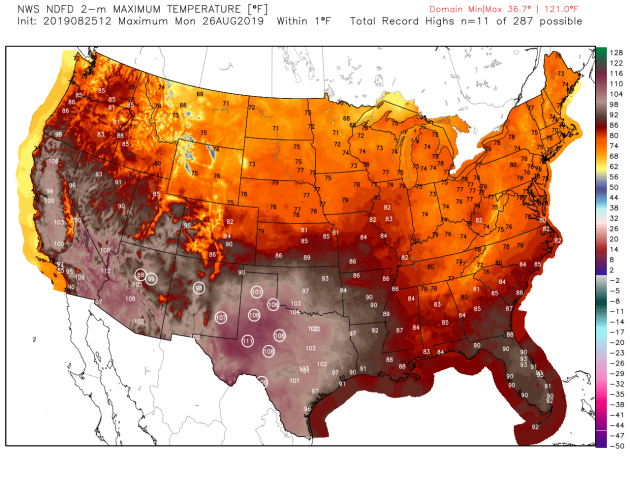 We could see numerous records broken Monday across the Southern Plains and the Southwest from Flagstaff, AZ, to areas like Albuquerque, Abilene, Amarillo, Lubbock, and San Angelo. 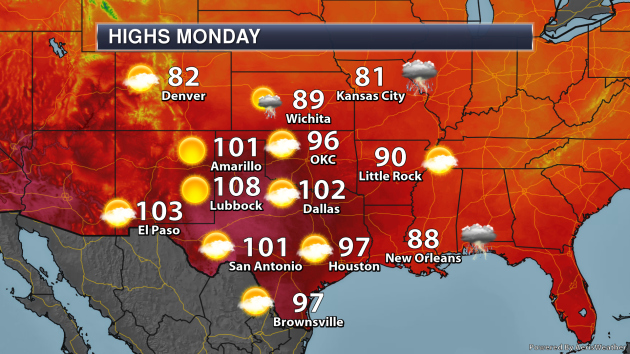 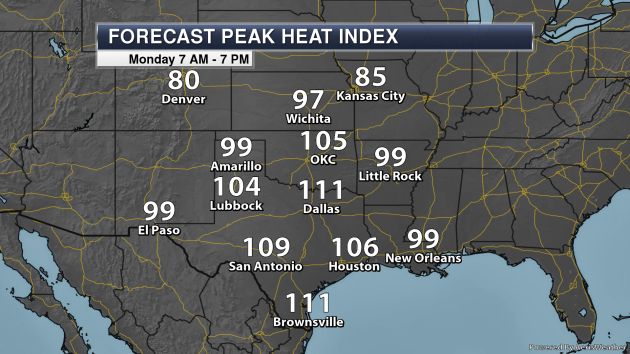 Taking a closer look at the heat across the Southern Plains on Monday, areas like Amarillo, Lubbock, Dallas, and San Antonio are all expected to climb into the 100s for highs. When you factor in the humidity, it’ll feel more like 111F at times during the afternoon in both Dallas and Brownsville. 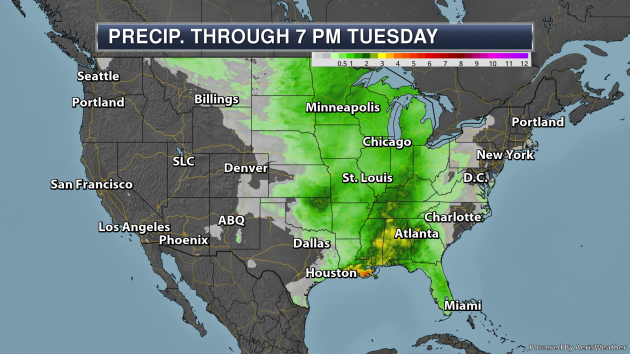 Some of the heaviest rain through 7 PM Tuesday will be along the northern Gulf Coast and in the Deep South, where rainfall totals could top 2-4″ as a frontal boundary lingers across the region. 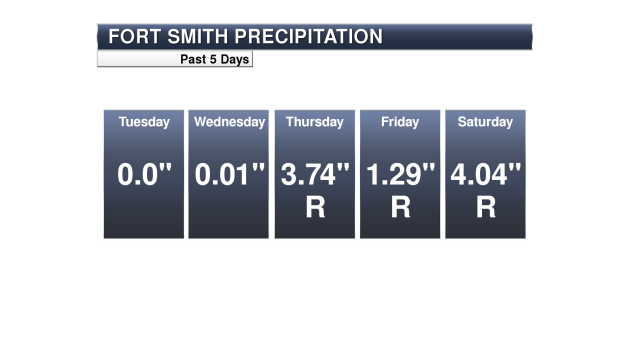 It’s been quite a wet few days down in Fort Smith, AR, where they have set three daily rainfall records in a row. Between Thursday and Saturday, over 9″ of rain has fallen! They are now up to 10.42″ of rain this month, 8.41″ above average and in second place for the wettest August on record. The August record is 10.89″ set in 1890. 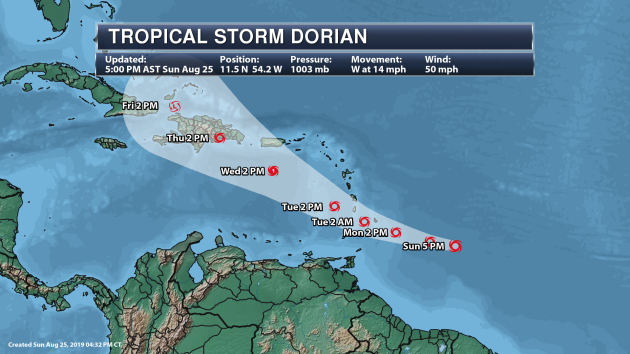 Tropical Storm Dorian has been strengthening out in the Atlantic. As of the 5 PM AST Sunday update from the National Hurricane Center, Dorian had winds of 50 mph and was moving west at 14 mph. The center of Dorian was 375 miles east-southeast of Barbados. The system is expected to strengthen over the next couple days, and it could be a hurricane over the Caribbean Sea Tuesday before weakening as it passes over Hispaniola by the end of the week. 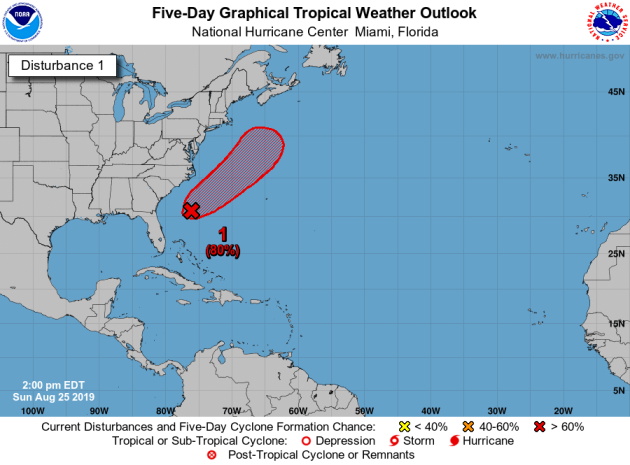 We also continue to track an area of low pressure located about 350 miles south-southwest of Cape Hatteras that has a chance to gradually develop into a tropical or subtropical system in the next couple of days. As of Sunday afternoon, this area had a 70% chance of formation in the next two days according to the National Hurricane Center, and an 80% chance in the next five days.

6 Injured in Lightning Strike at PGA Tour Championship in Atlanta

More from the New York Times: “Six people were hurt when lightning struck a golf course twice on Saturday during the third round of the Tour Championship. The strikes hit the East Lake Golf Course as fans and golfers waited for bad weather to pass. The tournament’s organizers responded by stopping play for the day, pushing the round to Sunday, and said the injuries did not appear to be life-threatening. Ambulances were summoned to an area between the 16th tee and the driving range around 4:45 p.m. Eastern Daylight Time. One of those hit was Billy Kramer, a resident of Dunwoody, Ga., and the owner of N.F.A. Burger, one of the tournament’s food vendors. He was in a cart, driving to collect more supplies for his stand off the eighth fairway, when a lightning bolt struck a pine tree just off the path where he was driving.” 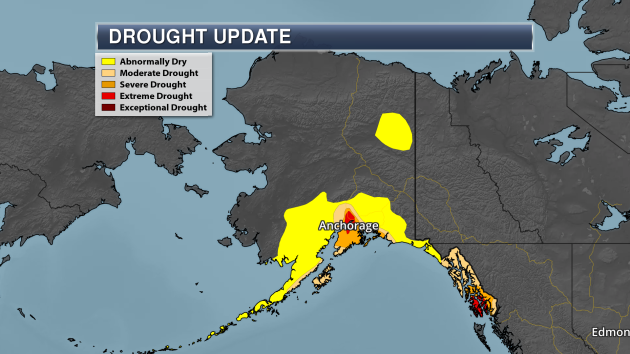 More from VOA News: “When a “Himalayan tsunami” roars down from the rooftop of the world, water from an overflowing glacial lake obeys gravity. Obliterating everything in its path, a burst is predictable only in its destructiveness.”There was no meaning in it,” one person who withstood the waters in India’s Himalayas told a Public Radio International reporter. “It didn’t give anyone a chance to survive.”Christian Huggel, a professor at the University of Zurich in Switzerland who specializes in glaciology and geomorphodynamics (the study of changing forms of geologic surfaces), said thousands of cubic meters of water moving down a mountain “is really quite destructive and it can happen suddenly.”That water comes from glacial lake outburst floods, or GLOFs, which are increasing in frequency as climate change increases the rate of glacial melting. This catastrophic lake drainage occurs wherever there are glaciers in places such as Peru and Alaska.”