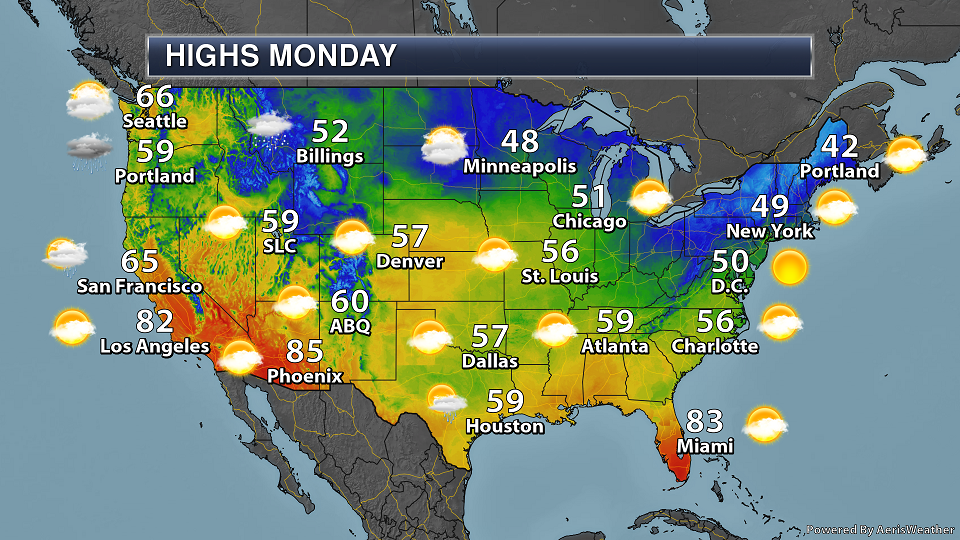 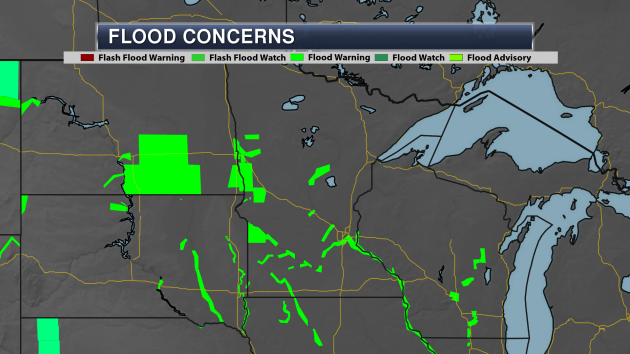 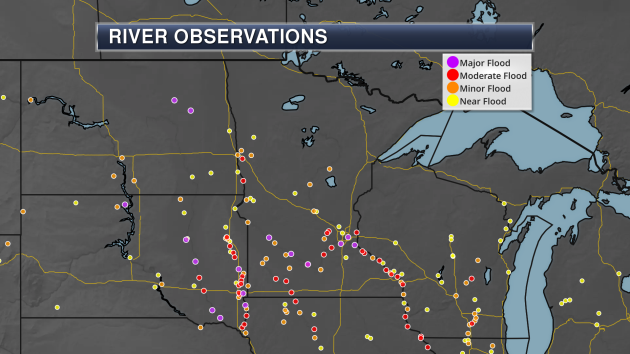 Numerous rivers – especially across the southern two-thirds of Minnesota – continue to be in flood stage as of late Sunday. Some of these river gauges indicate rivers are in major flood stage. 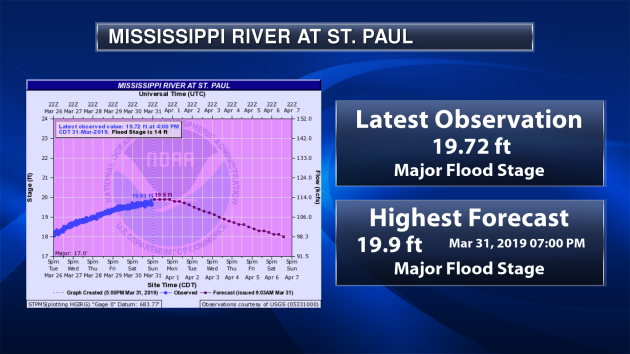 Taking a closer look at the Mississippi River at St. Paul, it is expected to crest late Sunday or early Monday, and slowly start to go down but stay in major flood stage into at least next weekend. 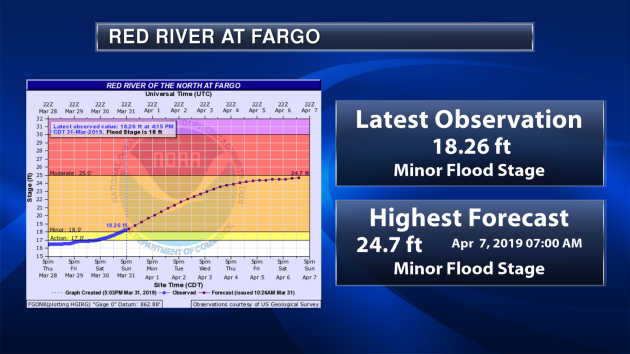 Meanwhile, the Red River up in Fargo has slowly been climbing over the past several days, and as of late Sunday sat in minor flood stage. The river will continue to climb through minor flood stage this week, nearing moderate flood stage by next Sunday. 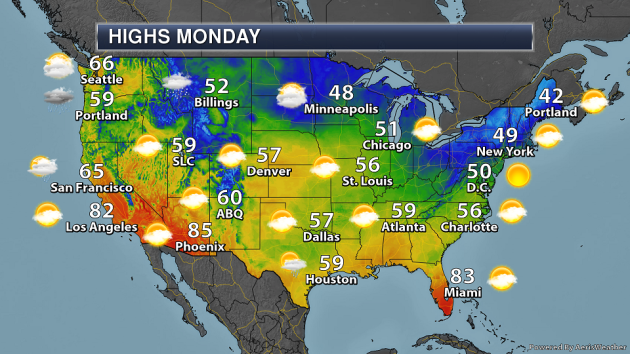 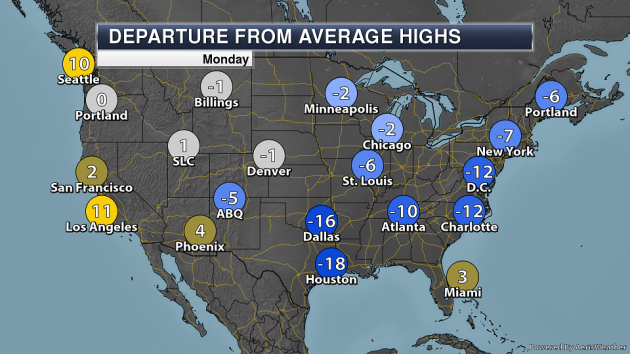 On Monday, a stalled out frontal system will bring parts of Florida into southern Georgia the threat of some showers and storms. Some areas of rain and snow are possible from the Northern Rockies into the Northeast with several different systems moving through the region. A stronger low will approach the Pacific Northwest, bringing the threat of rain and higher elevation snow along with it. The eastern two-thirds of the nation will mainly see below average highs (the exception being parts of southern Florida), while the west coast observes mainly above average highs. 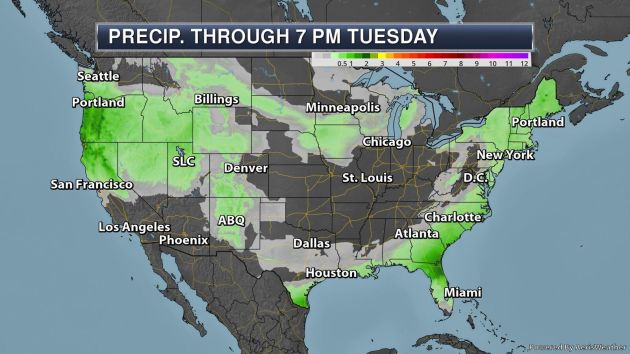 Three areas of heavy rain are possible through the beginning of the week. The low moving toward the Northwest could bring parts of Oregon and northern California 1-2″ of rain. 1-2″+ of rain is also possible in parts of the Southeast and far southern Texas in association with that slow moving/stalled out frontal system. 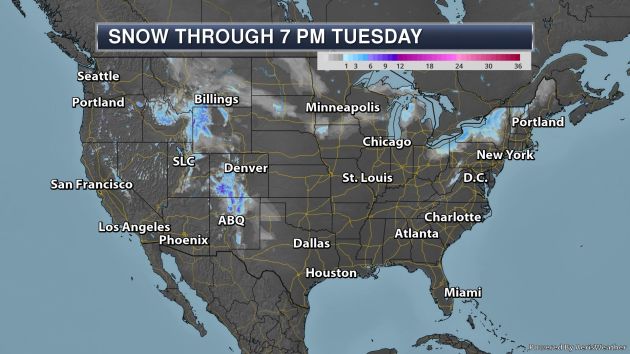 We could still see over a half a foot of snow over the next couple days across some of the higher elevations out in the western United States, with a couple of inches of snow possible in parts of New England as well.

More from Earther: “In an annual tradition stretching back more than two decades, on Thursday the National Guard and the U.S. Fish and Wildlife Service teamed up to drop nearly 10,000 spent Christmas trees into a New Orleans wildlife refuge. Apparently, it’s all for the good of the ecosystem. The “Christmas Tree Drop” may sound like some kind of portmanteau of a Christmas and a New Years’ celebration, but it’s actually a key strategy for building ecological resilience within the Bayou Sauvage National Wildlife Refuge, a 25,000-acre patchwork of marshlands, lagoons and bayous located within the city of New Orleans that’s habitat for some 340 species of birds. As refuge manager Shelley Stiaes explained to Earther, bundles of dead Christmas trees can be strategically placed in the freshwater ecosystem to absorb the energy of waves, reducing shoreline erosion.”

As vast swaths of Australia dry out, a mental health crisis takes shape

More from The Washington Post: “In a community of only about 100 people, Louise Hennessy says, neighbors need to look out for each other. Whenever someone goes quiet for too long, she picks up the phone to check that everything is all right. In recent months, more often than not, the answer has been no. “The stress of not knowing when it’s going to rain creates a lot of anxiety,” Hennessy said. More than two years of extreme drought has hit tiny Elong Elong — about 225 miles from Sydney — and other places across Australia hard. On a record-hot summer day in January, Hennessy, 59, didn’t have to call neighbors. This time, they were lining up to speak to her as she stood in the local gas station and handed out application forms for government assistance on behalf of a Catholic organization, the St. Vincent de Paul Society. Outside, a poster announced, “You’re not alone.””

More from USA Today: “Extreme weather events, supercharged by climate change, affected some 62 million people around the world in 2018, the United Nations’ weather agency said Thursday. In its yearly “State of the Climate” report, the World Meteorological Organization (WMO) said the planet’s biggest weather woes last year were floods (which swamped some 35 million people), and droughts, which affected another 9 million. Since 1998, about 4.5 billion around the world have been hurt by extreme weather. “We have seen a growing amount of disasters because of climate change,” said WMO Secretary-General Petteri Taalas. Taalas said that in the past 25 years, climate science has improved dramatically. This has provided solid evidence of accelerating sea level rise, shrinking sea ice, increasingly acidic oceans, glacier retreat, shrinking polar ice, and extreme events such as heat waves.”