Watching Another Tropical Wave In The Atlantic – National Weather Outlook For July 27, 2020 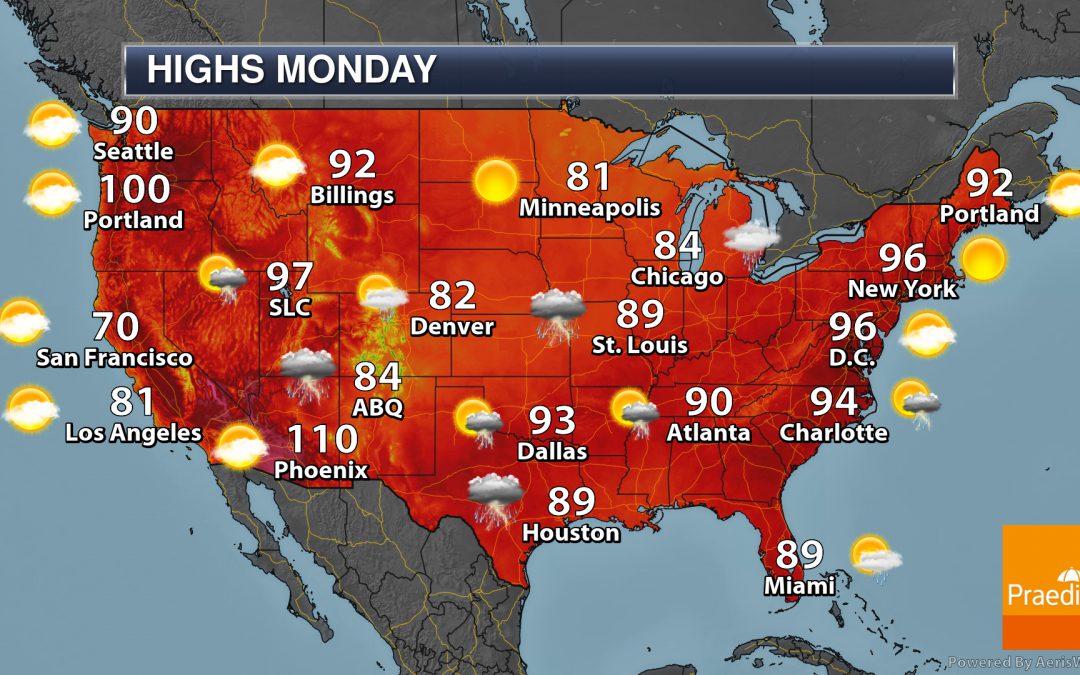 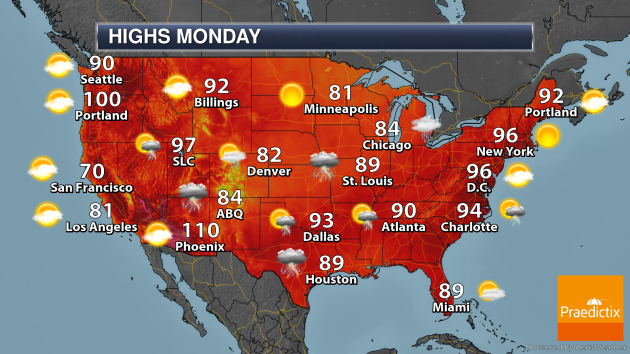 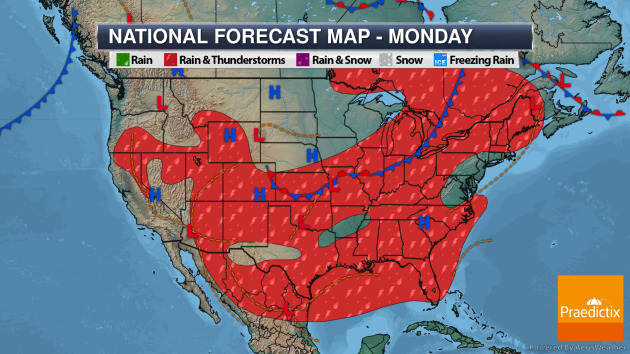 On Monday, a frontal boundary from the Central Plains to the Great Lakes will help spark off showers and thunderstorms. We will also be watching heavy rain still possible in portions of southern Texas – some of which are connected to Hanna over northern Mexico. 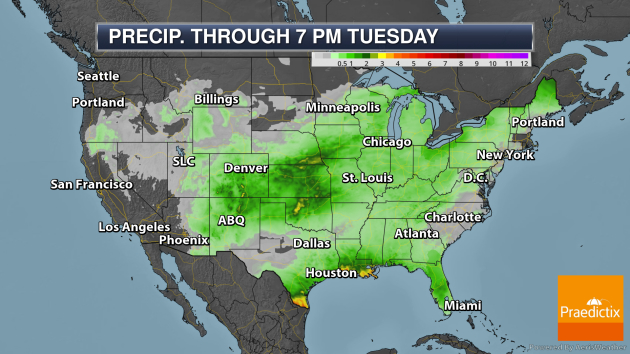 Through Tuesday evening there will be a few areas of heavier rain in the lower 48. The first will be in southern Texas, connected to Hanna. Heavy rain will be possible along portions of the northern Gulf Coast over the next few days with some areas potentially picking up 1-2″ of rain a day. We could also see a few inches of rain fall from the Front Range into the Central Plains. 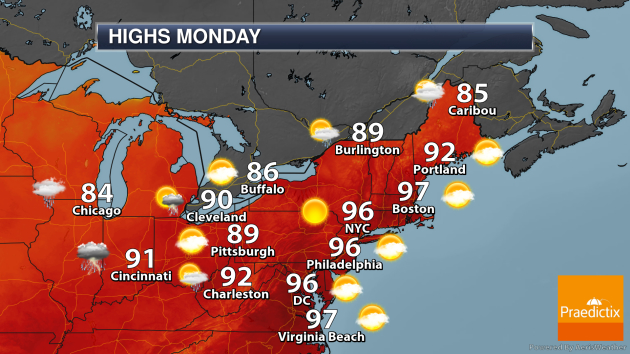 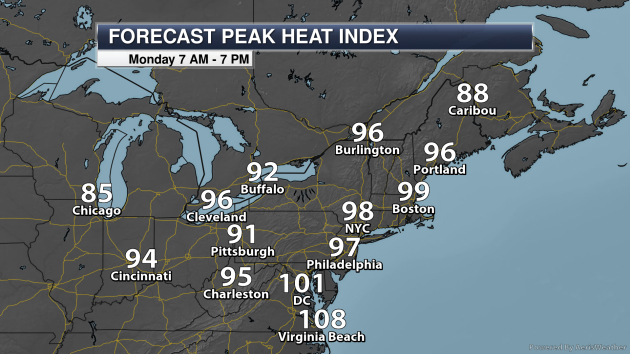 In the Northeast, heat will be a concern in some areas Monday as heat index values approach 100F in New York City and Boston. 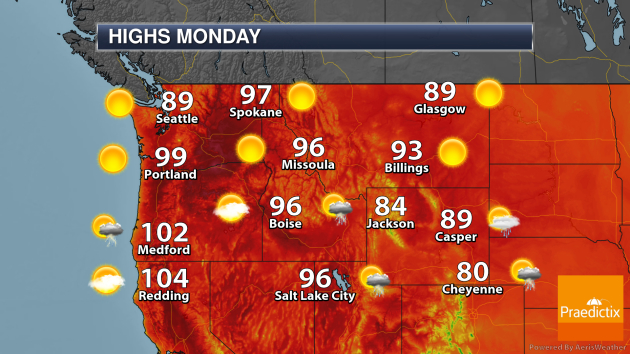 Meanwhile, highs will be right around 100F on Monday out in Portland, OR, a value they hit about once a year on average. 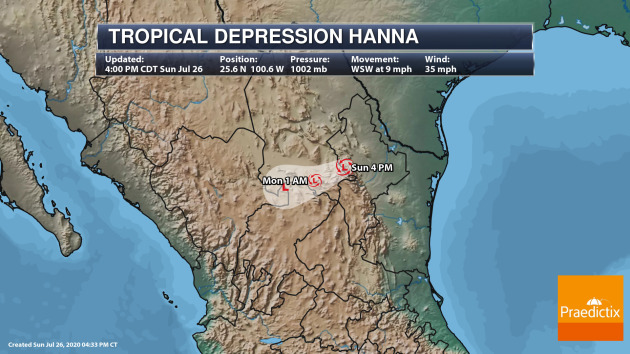 After making landfall Saturday in southern Texas, Hanna continued to weaken across portions of Mexico on Sunday. It is expected that this system will dissipate Monday due to the rugged terrain of Mexico, but it could still bring heavy rain to portions of southern Texas and northern Mexico through that time. 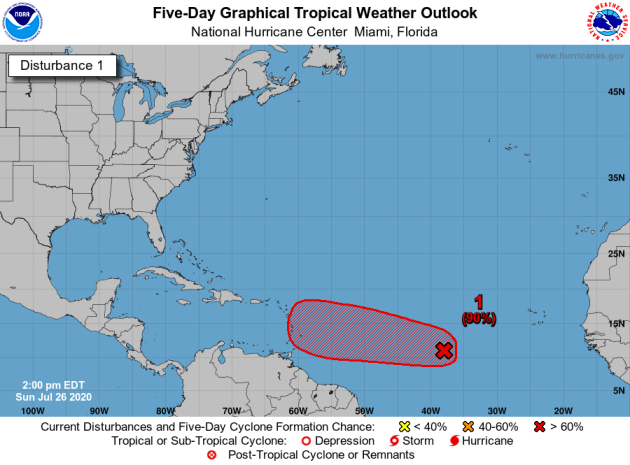 Meanwhile, we have our eye on another tropical wave out in the Atlantic that has a HIGH chance of becoming our next named system as we head through the last week of July. It will continue westward through the middle of the week, approaching the Lesser Antilles. Once it does so, a number of models have this system passing near the Greater Antilles. While it is too early to know if there will be impacts in the U.S. from this storm, it is one to keep an eye on over the next several days. 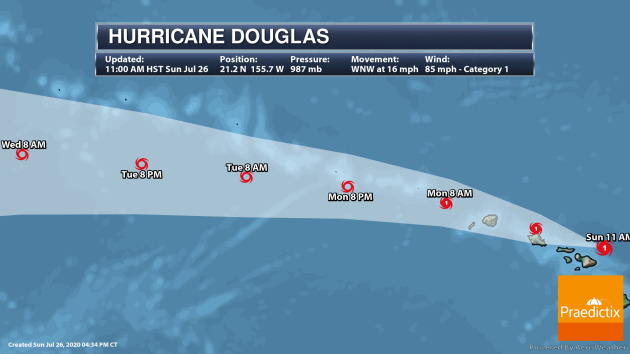 Out in the Central Pacific, Hurricane Douglas continues to approach Hawaii, impacting the state as we head through Sunday Night and Monday Morning local time with heavy rain and destructive winds.

The curtain is about to come down on Comet NEOWISE

More from Live Science: “Since rounding the sun, the comet has slowly been getting higher in the northwest evening sky and its position relative to the Big Dipper has made it fairly easy to find. But now, an object that has been all but absent from the evening sky since NEOWISE rounded the sun, is now back in view and will pose an increasing hindrance to comet watchers with each passing night. That object is the moon. This weekend it will be a widening crescent and its light will not pose too much of a nuisance, but on Monday (July 27) it will reach its first quarter (“half”) phase, and in the nights thereafter it will be a waxing gibbous, and flooding the late night and early morning sky with its light during the coming week. And now that the comet is now moving away from both the sun and the Earth, it will continue to fade though at a more rapid pace.”

25 Years After Returning, Yellowstone’s Wolves Are the Most Studied but Misunderstood Good Boys

More from Earther: “Twenty-five years ago, wildlife managers in Yellowstone National Park undertook one of the most consequential actions in modern American conservation when they unleashed 14 wolves into the park. The program to reintroduce wolves to Yellowstone in 1995 has since seen wolf packs fan out across one of the largest intact ecosystems in the Lower 48. Reintroducing an apex predator that humans wiped out earlier in the century has had consequences both intended and unintended. It was—and continues to be—wildly controversial but also 100% right. Ecosystems have flourished under a newly found balance; tourists have come to catch a glimpse of animals no longer found in many other states; and scientists have had a chance to observe an unprecedented experiment in rewilding.”

More from the Nikkei Asian Review: “The risk of deadly downpours has risen Japan in recent years due to global warming, adding to people’s worries this summer, on top of the new coronavirus pandemic. Heavy rains, floods and landslides this month have destroyed more than 1,000 residential buildings, killing at least 78 people across Japan, mostly in the country’s southwestern Kumamoto Prefecture. For the 24 hours through the morning of July 4, the city of Ashikita in northern Kumamoto was hit by torrential rain said to “occur once in 50 or 100 years,” according to the National Research Institute for Earth Science and Disaster Resilience, or NIED. Some cities in the region got more than a month’s worth of precipitation overnight.”