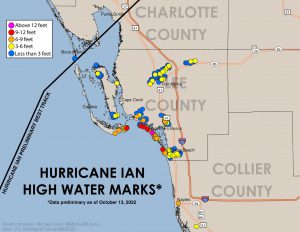 What New Data Reveal About Ian’s Storm Surge. Michael Lowry writing at Substack has an interesting post; here’s an excerpt: “…The USGS has collected hundreds of high-water marks over the past few weeks. Filtering for only high-water marks with a +/-0.2 ft accuracy reveals the worst storm surge flooding Gulf side from Sanibel Island to Bonita Beach, focused on Fort Myers Beach in Lee County. The highest storm surge was confined primarily to Lee and northern parts of Collier Counties about 25 to 30 miles south of where Ian came ashore, near its radius of maximum winds of onshore flow. High water marks on Fort Myers Beach reached near 16 feet in spots. 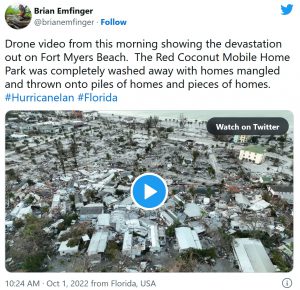 What Made Hurricane Ian So Intense? By the Numbers. Ian Livingston writes for The Washington Post’s Capital Weather Gang; here are a couple of excerpts that caught my eye: “…Around 2.7 million customers were in the dark at peak outage in Florida. That adds up to about 25 percent of the state, markedly higher than for Category 5 Hurricane Michael, which left 4 percent of the state without power in 2018…Ian is estimated to have caused more than $60 billion in private insured losses just in Florida, making it the second-largest disaster loss event on record, according to the industry trade group Insurance Information Institute. Ian trails Hurricane Katrina of 2005, which caused $89.7 billion in inflation-adjusted insured losses…”

Hurricane Ian May Have Been Florida’s Costliest Storm. Axios has details; here’s the intro: “Hurricane Ian likely caused $53 billion to $74 billion in insured losses from Florida to the Carolinas, with a “best estimate” of $67 billion, according to new data released today from modeling firm RMS.

The big picture: These preliminary damage totals would make Hurricane Ian the costliest storm in Florida history and second nationally to Hurricane Katrina when adjusted for inflation. 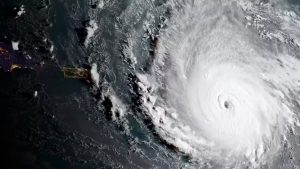 What Hurricane Categories Really Mean. A post at HowStuffWorks has a few eye-popping statistics: “…While the Saffir-Simpson scale is a good measuring tool, it doesn’t really tell the full story of a hurricane’s impact. Hurricanes pack a lot of kinetic energy, and as a byproduct, a hurricane’s power increases exponentially from one category to the next as wind speed increases. A Category 5 hurricane, for example, is 500 times more powerful than a Category 1. How does this relate to property damage? Compared to a Category 1, a Category 2 hurricane can generate seven times the amount of damage, while a Category 5 storm can generate 144 times the amount of destruction…” 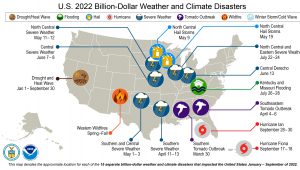 Ian is the 15th-Billion Dollar Disaster This Year So Far. NOAA has details: “The U.S. was hit with 15 separate billion-dollar weather and climate disasters in the first nine months of the year, according to scientists from NOAA’s National Centers for Environmental Information. Along with September 2022 being quite warm and dry, it saw an uptick in tropical activity in the Atlantic, with Hurricanes Fiona and Ian bringing devastation in their wake.

How Finland Put Traffic Crashes On Ice. What are they doing that we aren’t? A post at Bloomberg explains; here’s a clip: “…In Helsinki, city officials leverage street design to reinforce lower speed limits. “We deliberately have narrow lanes, so the driver doesn’t feel comfortable,” said Reetta Putkonen, the director of Helsinki’s transportation planning division. “Three and a half meters is a normal lane width, even 3.2. We also use trees and bushes to push people to go slower.” For comparison, in the US many lanes are 12 feet (3.7 meters) wide. Helsinki officials have focused on slowing down cars, rather than sharply limiting their use in the city center (as Oslo has accomplished by removing street parking and instituting road tolls) or building a comprehensive network of separated cycle tracks (as Amsterdam has done)…” 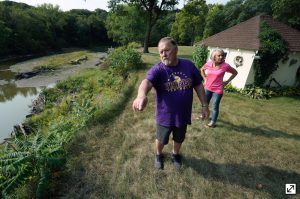 A Wetter World is Changing Farm Country. Can Growers Adapt? Star Tribune takes a look at precipitation trends; here’s an excerpt: “…Similar trends of heavier rains and increased flow can be seen across the Midwest region. All that water has to go somewhere. With a changing climate, the farms of the future will look different, experts say. How communities adapt will determine what kind of farming they can do. “This rain isn’t going away,” said Jennifer Kanine, the director of natural resources for the Pokagon Band of Potawatomi, which has worked to restore wetlands in northwest Indiana’s agricultural areas. “We need to start working with it instead of fighting it,” she continued. “We need to ask, how can we best manage all this water, because we’ve compromised the system so much already…” 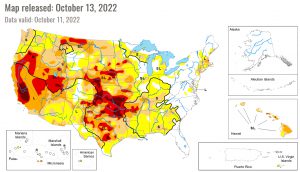 Climate Change Made 2022’s Northern Hemisphere Droughts At Least 20 Times More Likely. Carbon Brief explains: “The summer of 2022 saw Europe’s worst drought in 500 years. A combination of record-breaking temperatures and low rainfall caused rivers to dry, wildfires to rage and crop failures to compound already high food prices. Elsewhere, the American west experienced its most extreme drought conditions in 1,200 years and sections of the Yangtze – China’s longest river – reached their lowest level since at least 1865 amid extreme temperatures and a “severe lack of rainfall”. The World Weather Attribution service finds that droughts of this intensity can be expected across the northern hemisphere once every 20 years in today’s climate. Yet, in a world without climate change they would be expected only once every 400 years or less...”

The Climate Economy is About to Explode. The Atlantic details how: “Late last month, analysts at the investment bank Credit Suisse published a research note about America’s new climate law that went nearly unnoticed. The Inflation Reduction Act, the bank argued, is even more important than has been recognized so far: The IRA will “will have a profound effect across industries in the next decade and beyond” and could ultimately shape the direction of the American economy, the bank said. The report shows how even after the bonanza of climate-bill coverage earlier this year, we’re still only beginning to understand how the law works and what it might mean for the economy...”