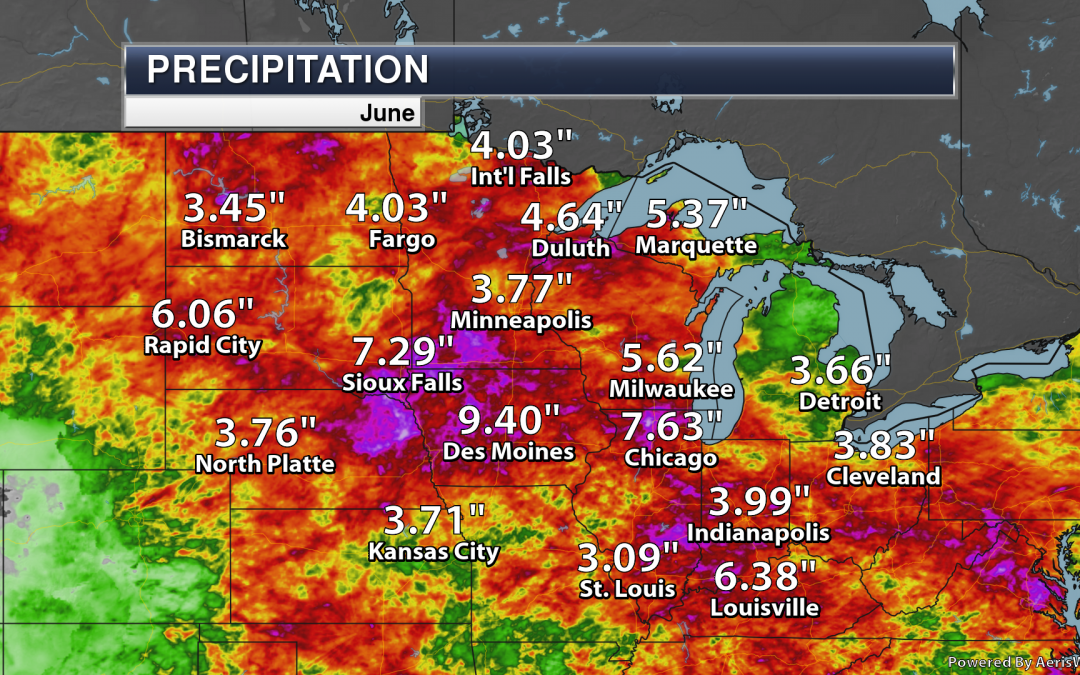 June 2018 was a wet and warm month to begin meteorological summer across a good portion of the nation. Let’s take a look back some of the extremes that were found across the nation last month in this edition of D.J.’s PraeDigits. 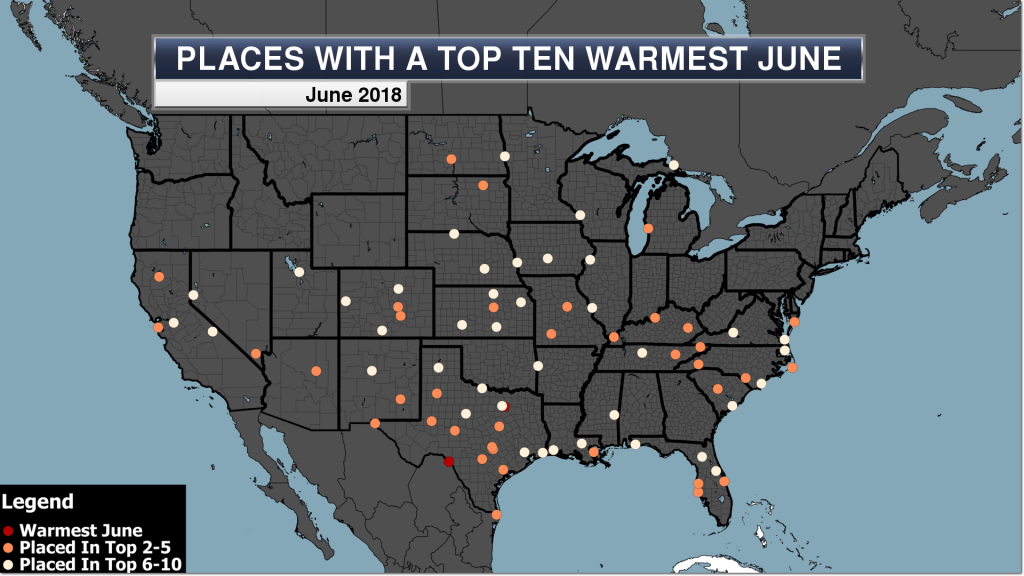 The beginning of summer typically means one thing across many areas of the nation: heat. This June didn’t disappoint especially across the southern United States as well as the Midwest, with an overall total of 79 long-term NWS climate locations reporting a top ten warmest June on record. That included Dallas (Love Field Airport) and Del Rio, both of which saw their warmest June on record.

Here’s a list of some of the locations that saw a top ten warmest June on record: 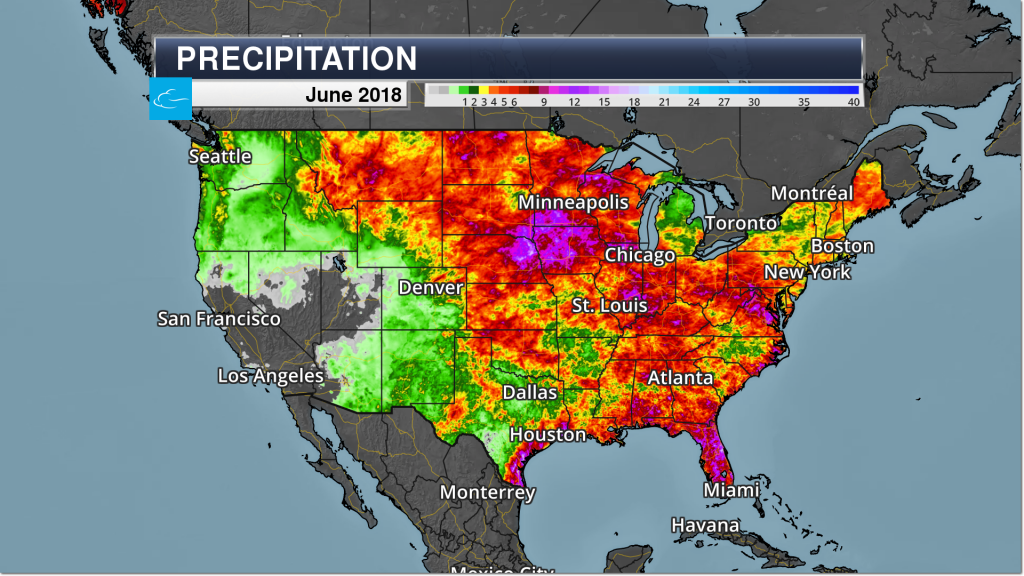 In June 2018, very heavy pockets of rain fell across parts of the nation. Areas from the upper Midwest to the Mid-Atlantic, parts of the Southeast and along the Gulf Coast all got hammered with over 6-9″ of rain in spots. 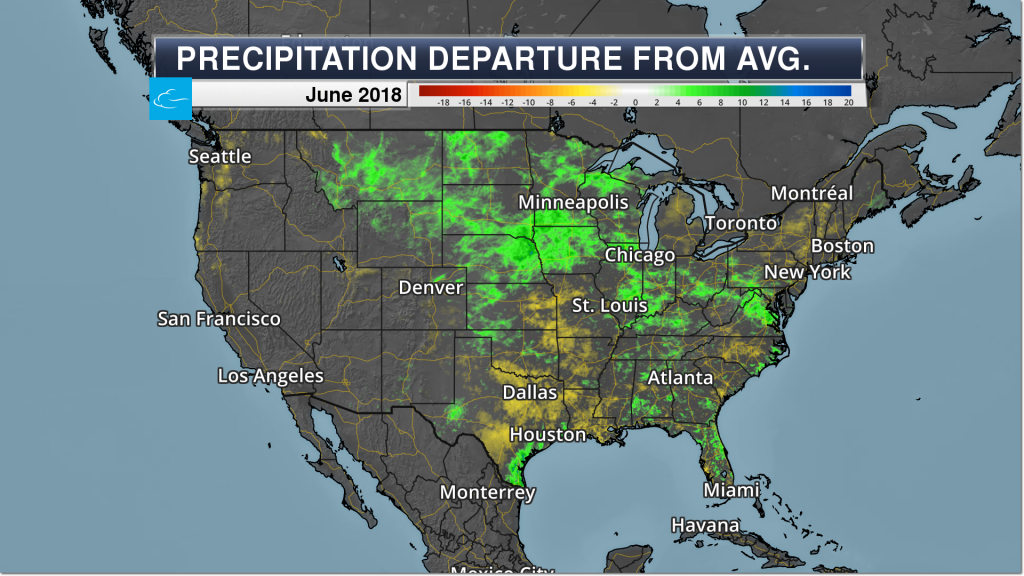 Three areas of above-average rain stick out vividly on the departure from average map for the month: one from Nebraska into the western Upper Peninsula of Michigan, a second across parts of the Mid-Atlantic, and a third along the Texas coast. Meanwhile, you can see an area of below average precipitation in the central United States, stuck in between those areas where heavy rain did fall. 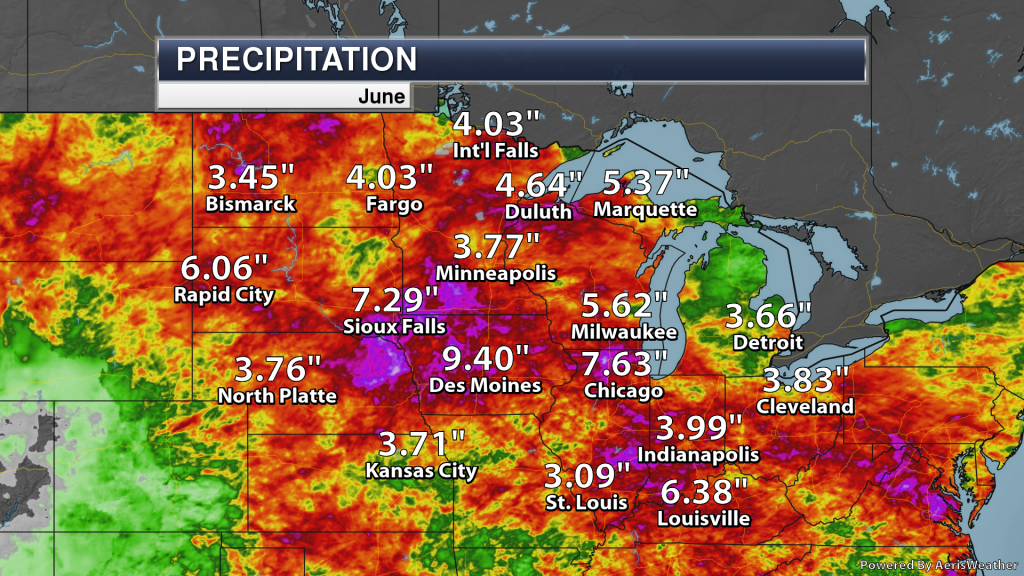 June rainfall amounts across this upper Midwest. Find out how Praedictix can create custom weather graphics suited for your needs.

Some of the heaviest rain in June 2018 fell in parts of the upper Midwest, including some areas of Minnesota, Wisconsin, South Dakota, Iowa, and Illinois that picked up over a foot of rain during the month. These totals in some areas are more typical of a two to three-month rain total!

Due to very heavy rain in short amounts of time, we saw numerous Flash Flood Emergencies that were issued including: 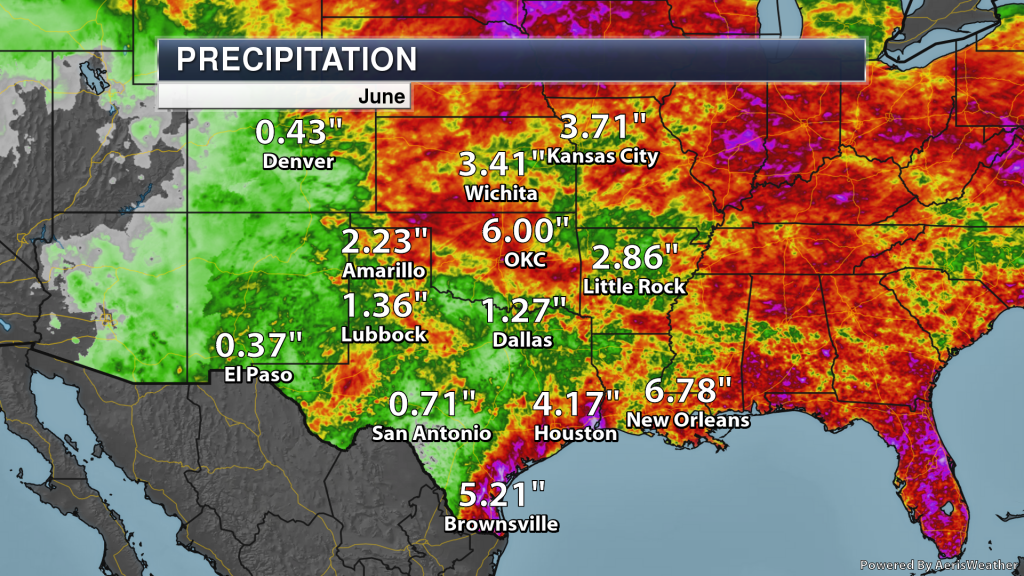 Heavy rain also fell across parts of the western Gulf Coast for approximately a four day period beginning on the 18th. This heavy rain led to some Flash Flood Emergencies being issued across the region. Beaumont, TX, ended June 2018 with 13.93″ of rain, and a CoCoRaHS station near Rockport saw a total of 19.15″ of rain.

Meanwhile, Richmond, VA, saw very heavy rain during the morning hours of the 22nd with 7.25″ of rain falling. 3.29″ of that fell within a 33-minute period from 3:50 AM to 4:23 AM. This heavy rain caused flooding at the Richmond Airport.

Various Dry Pockets Across The Nation 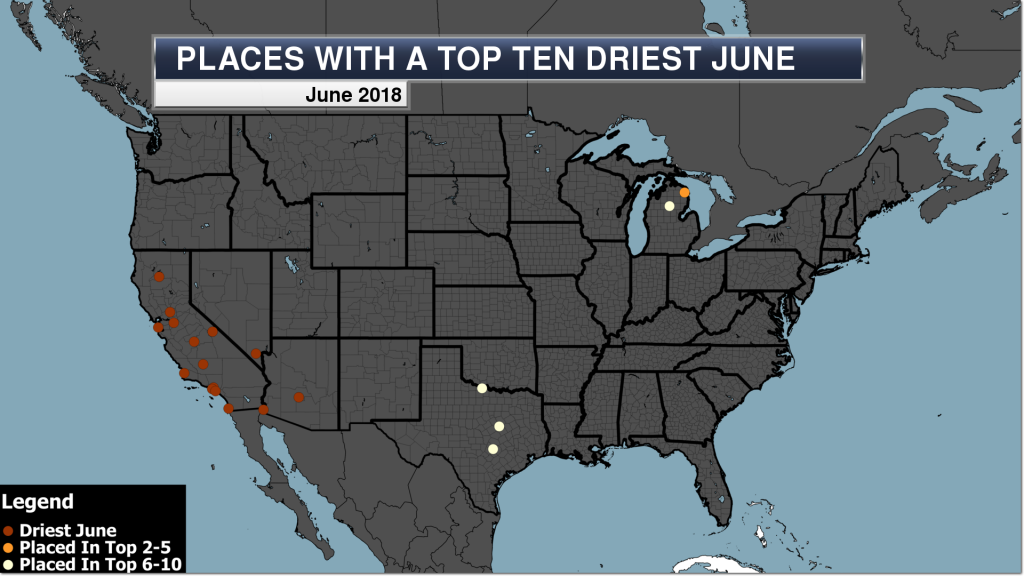 Even though we had a few dry spots across the nation when we looked at the departure from average map above, we didn’t see many locations that actually saw a top ten driest June on record. Overall, twenty long-term NWS climate locations saw a top ten driest June on record, with many of those occurring in the Southwest. Many of the areas in the Southwest typically don’t receive that much rain during the month of June, and this June was no different. One of the biggest differences was in Redding, CA, though, as they receive 0.69″ of rain in June on average and only picked up a trace last month. There were a few areas of Texas and Michigan that did rank in the top ten as well. Here are those locations:

What Could The Month Of July Hold?

As we move into July, the Climate Prediction Center is expecting warmer than average weather across a good portion of the lower 48, with the highest probabilities across the Northeast.

Weather impacts our lives every single day – and weather apps can only go so far. Praedictix relies on the human factor, expert meteorologists, to interpret weather for specific industries, tailoring a personalized weather narrative that adds value, saves time, saves money, and save lives. Contact us to find out how Praedictix can help you: