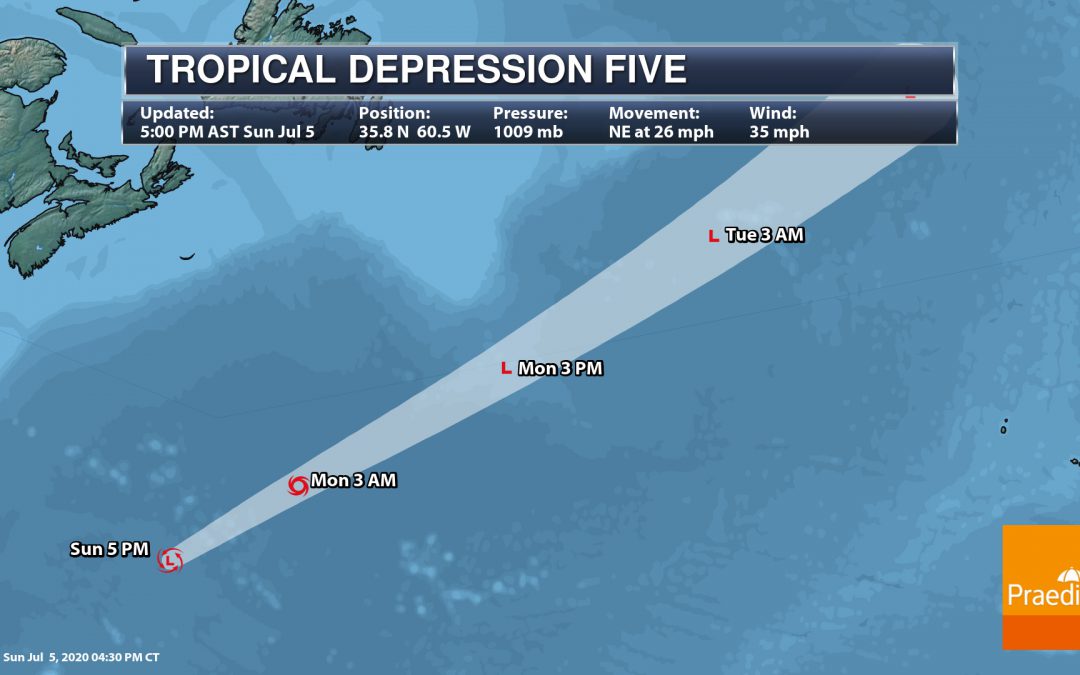 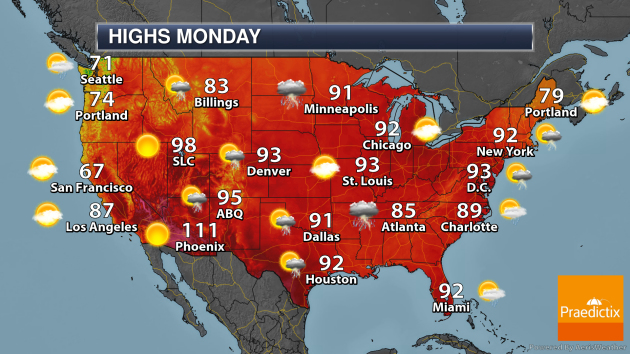 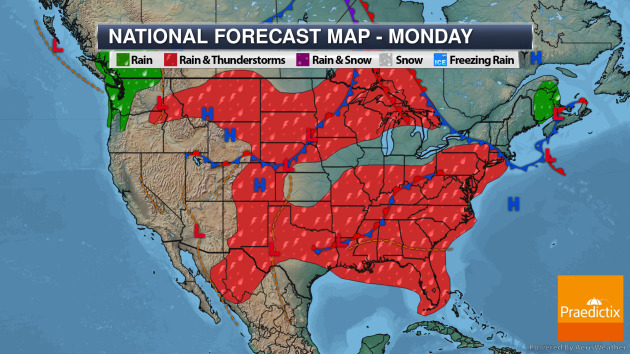 On Monday, a system working into the Southeast will produce the chance of showers and thunderstorms across the region. I’ll have more on what could eventually happen with this system in a moment. A stationary front lingering from the Southern Plains into the Ohio Valley could produce showers and storms. A cold front attempting to move southeast across the Northern Plains will produce some stronger storms – this front will eventually stall out and lift back north later in the week. A few showers are possible in the Pacific Northwest. 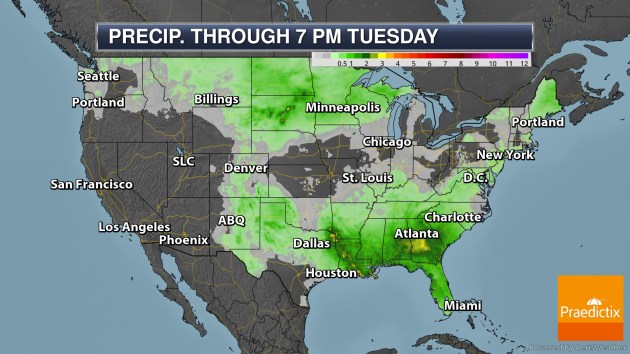 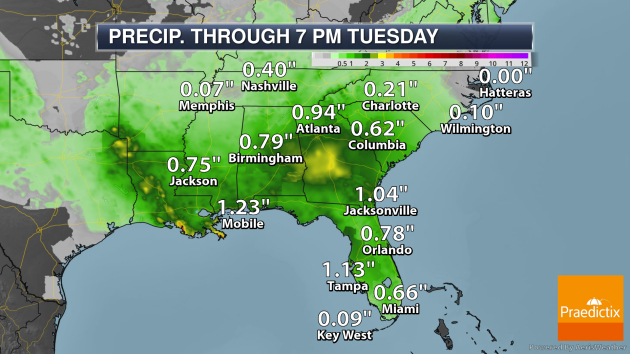 Heavy rain will continue to be an issue across portions of the Deep South and Southeast through the beginning of the week, with over 3″ possible in some locations. Some areas of the Northern Plains could also see 2-3″+ of rain due to rounds of storms. 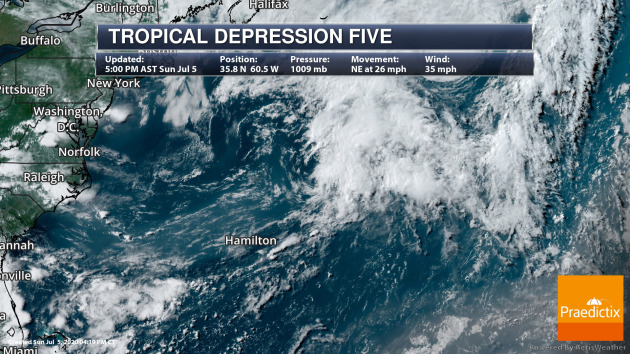 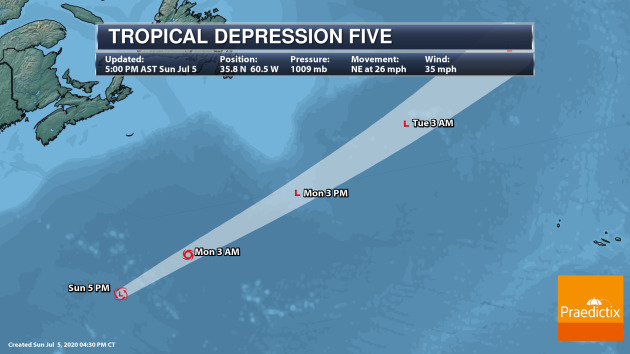 We are also tracking the tropics as we end this holiday weekend. On Saturday, Tropical Depression Five formed southwest of Bermuda and moved just north of the island Saturday night into Sunday morning. This system will continue to move northeast over the next couple of days, becoming post-tropical Monday. However, before it becomes post-tropical, it could become a Tropical Storm. 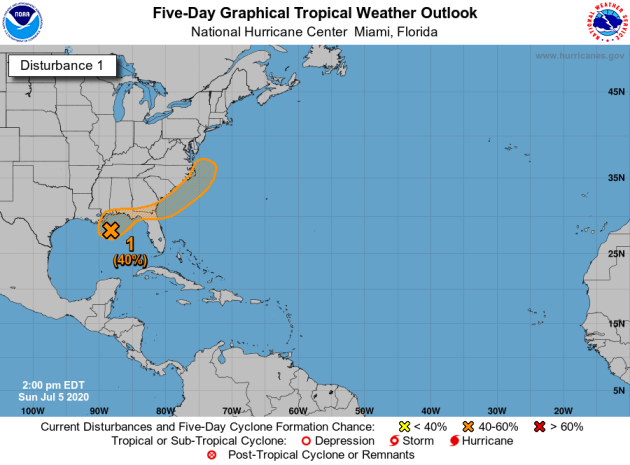 The National Hurricane Center is also keeping an eye on an area of low pressure across the northern Gulf Coast that has a 40% chance of forming into a tropical system in the next five days. Here is what the NHC had to say about the system at 2 PM ET:

More from Gizmodo: “A new bird song is spreading like wildfire among Canadian white-throated sparrows, at a scale not seen before by scientists. Birds rarely change their chirpy little tunes, and when they do, it’s typically limited to the local environment, where slight song variants basically become regional dialects. New research published today in Current Biology describes an extraordinary exception to this rule, in which a novel song sung by white-throated sparrows is spreading across Canada at an unprecedented rate. What’s more, the new song appears to be replacing the pre-existing melody, which dates as far back as the 1960s.”

More from CNET: “The skies over Tokyo were lit up by an explosive extraterrestrial object early Thursday morning that also came with a sonic boom, according to some reports. Videos of the event show a spectacular light with green and purplish hues flying across the sky for just a few seconds at around 2:30 a.m. local time, before the light fizzles out. “I thought a person living (in the condo) above knocked down a shelf,” one local said, according to the Japan Times.”

Dry tropical forests may be more at risk than wet rainforests, study says

More from The Guardian: “Dry tropical forests are more vulnerable to the impacts of global heating than had been thought, according to new research, with wildlife and plants at severe risk of harm from human impacts. Some tropical forests are very wet, but others thrive in a drier climate and scientists had thought these drier forests would be better adapted to drought, and therefore more able to cope with the effects of the climate crisis. But a new study suggests the opposite may be true, and forests with an already drier climate show greater loss of biodiversity, and a reduced ability to support a wide variety of wildlife and plant species, when subjected to warmer temperatures. Wetter forests, with year-round rainfall, show less change in biodiversity.”