Heavy Rain This Week In The Southern United States – Monday’s National Weather Outlook For May 6th, 2019 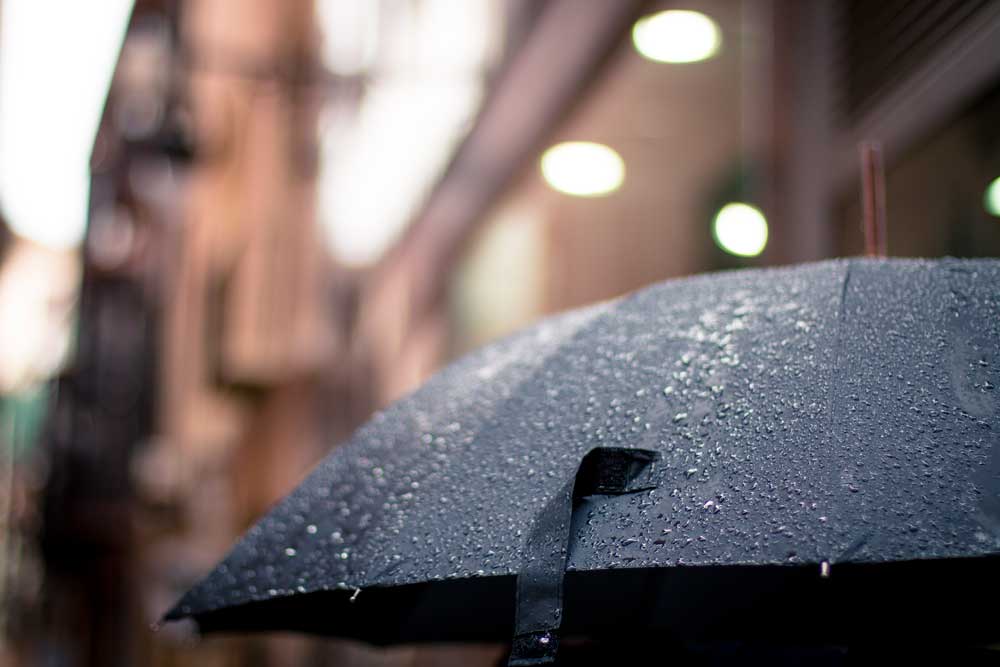 Anniversary Of The May 6, 1965 Twin Cities Tornadoes 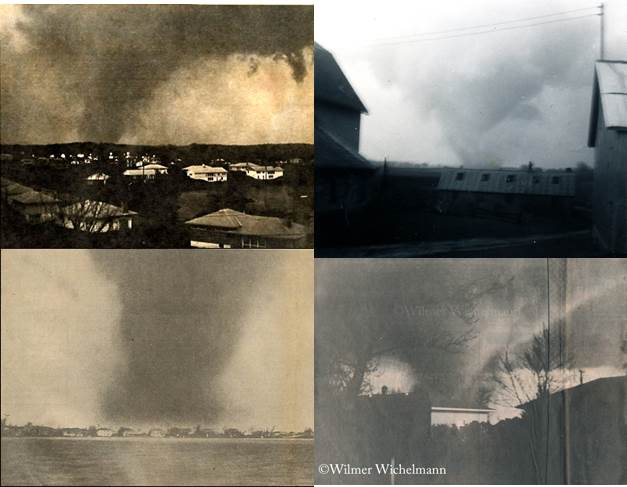 Monday marks the 54th anniversary of the six tornadoes – four of which were rated F4 – that impacted the Twin Cities on May 6th, 1965. Two of those F4 tornadoes struck Fridley within 2 hours of each other. The Twin Cities National Weather Service has a good write-up on the tornadoes from that day: “May 6, 1965 was one of the worst tornado outbreaks in Minnesota history. Six tornadoes affected six counties around the Twin Cities with 13 fatalities and over 500 injured. The tornado outbreak lasted three hours and caused $51 million in damage. There were four F-4s, one F-3, and one F-2. Two of the F-4s crossed paths, causing even more damage. These tornadoes developed due to low pressure in North Dakota/Canada and unstable air behind a warm front over the Twin Cities region.” 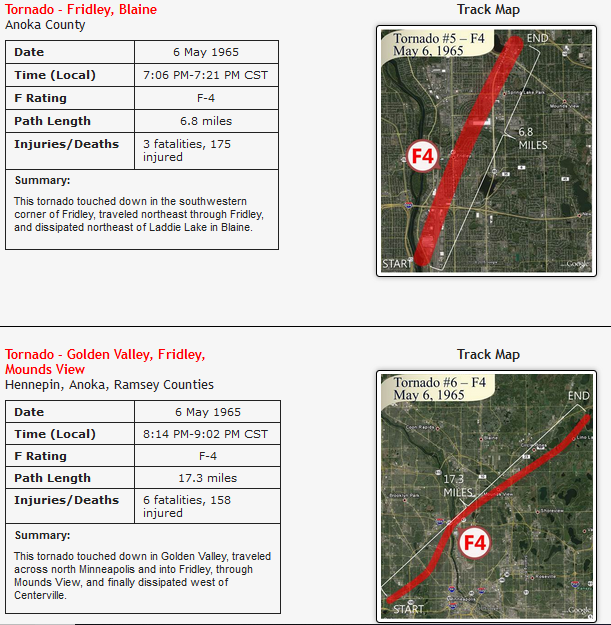 The Minnesota State Climatology Department also has a write up on the tornadoes from that day: “Debates have continued since 1965 about the actual tornado tracks, their timelines, and about their true human toll, but the official record indicates that the tornadoes killed thirteen people and injured 683 more, with 600 homes destroyed and 1,700 people rendered homeless. Six fatalities occurred in Mounds View with the final tornado of the evening. Another tornado claimed three lives in the Island Park area of Mound, on the north and northwest side of Lake Minnetonka. Other deaths were reported in Fridley, Spring Lake Park, and in Sibley County, between Green Isle and Hamburg.” 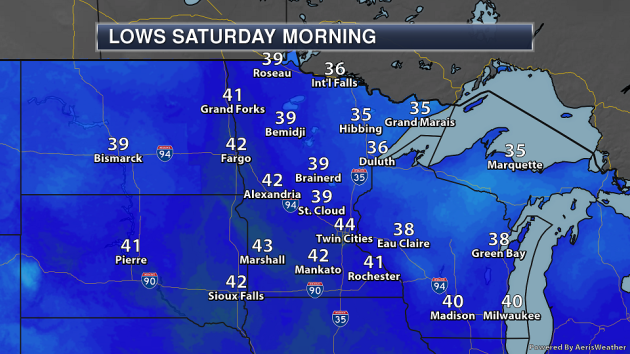 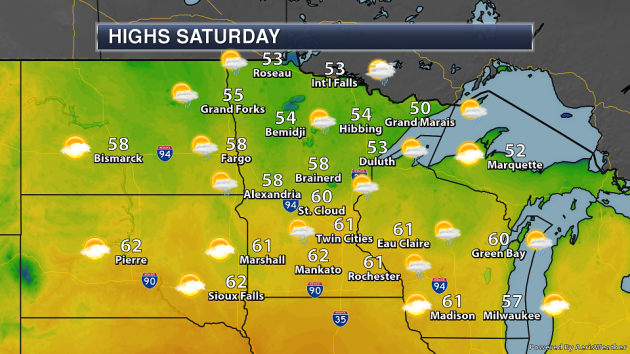 Next Saturday is one that many people are awaiting – it’s the Minnesota Fishing Opener! Right now it does appear a few showers will be possible across the state, but timing varies depending on which model you look at – the GFS has rain chances around throughout the day, with the European showing rain chances in northern Minnesota during the afternoon hours. Temperatures will start off in the 30s and 40s across the state, climbing to highs in the 50s in northern Minnesota with 60s in southern parts of the state. Don’t forget – Mother’s Day is next Sunday as well! 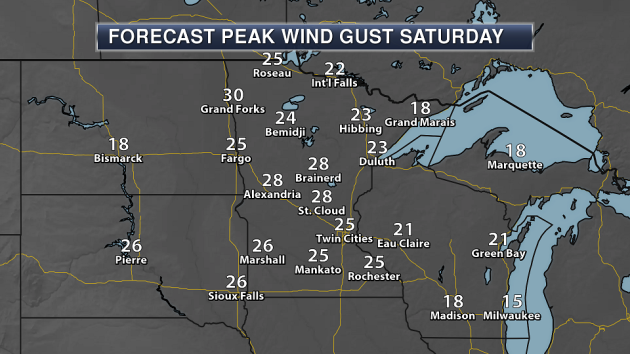 Conditions could be a bit windy as well throughout the day on Saturday, with wind gusts in the 20 mph range expected at the moment. 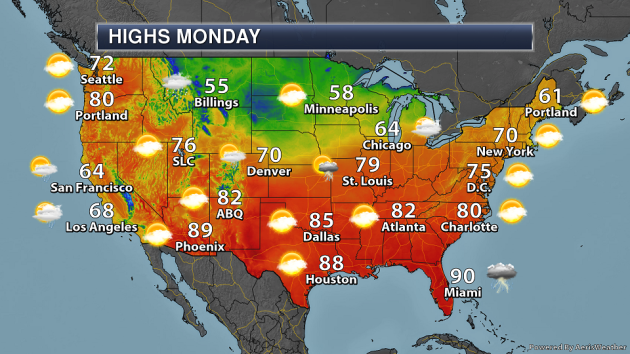 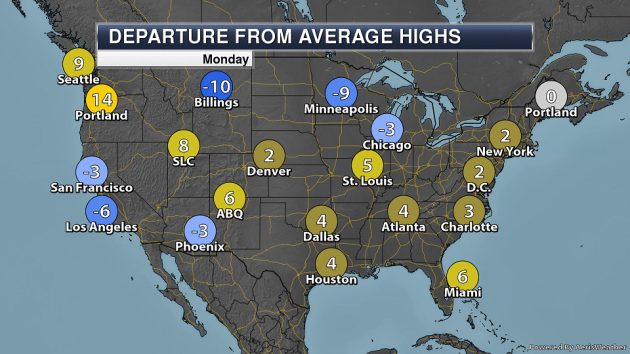 On Monday, a cold front will help produce showers and storms from parts of the Northeast and Great Lakes into the Central Plains and Rockies. A dry line across parts of western Texas will likely help set off a few storms by the evening hours. A second front extended from southern Texas across the Gulf of Mexico to southern Florida will also be the focus for some rain. Meanwhile, an area of low pressure across parts of California and Nevada will also produce some rain and higher elevation snow. 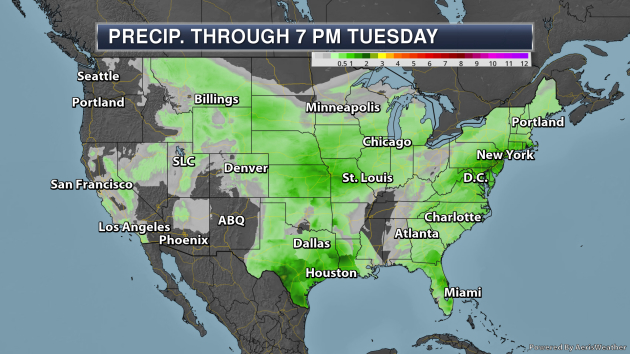 Meanwhile, the seven day rainfall outlook shows the potential of 4-7″+ of rain across parts of the Deep South from eastern Texas to northern Mississippi. 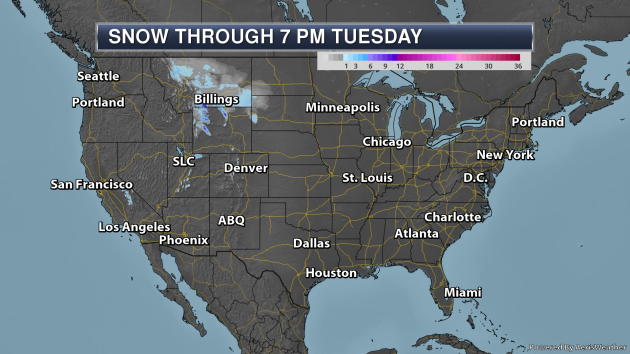 Looking at snow (yes, we still have to show this map), up to about a foot will be possible across some of the higher elevation spots in Montana and Wyoming.

More from NIDIS: “Based on estimates from the Texas A&M Forest Service (TFS), the severe conditions in Texas during the 2011-2012 drought affected about 300 million trees and killed an estimated 5.6 million urban shade trees. Determining these estimates currently requires resource-intensive in situ data collection methods. To investigate if satellite data can be used instead to provide estimates on how urban trees respond to widespread drought, TFS and the U.S. Forest Service Southern Research Station partnered with the NASA DEVELOP program. NASA DEVELOP teams complete rapid research projects in 10 weeks with guidance from NASA and partner science advisors. The research projects focus on addressing local and international community concerns utilizing NASA’s Earth observations.”

More from InsideClimate News: “Global warming has been fueling droughts since the early 20th Century, when soils started drying out at the same time across parts of North and Central America, Eurasia, Australia and the Mediterranean, new research shows. The researchers say the surprising early-century findings provide the clearest signal yet that human-caused greenhouse gas emissions have been changing the hydroclimate in ways that can devastate agriculture, health and livelihoods.”

More from Climate News Network: “The United Kingdom has taken a potentially momentous policy decision: it says there is a UK climate emergency. On 1 May British members of Parliament (MPs) became the world’s first national legislature to declare a formal climate and environment emergency, saying they hoped they could work with like-minded countries across the world to take action to avoid more than 1.5°C of global warming. No-one yet knows what will be the practical result of the resolution proposed by Jeremy Corbyn, the Opposition Labour leader, but UK politicians were under pressure to act following a series of high-profile strikes by school students in recent months and demonstrations by a new climate protest organisation, Extinction Rebellion (XR), whose supporters closed roads in the centre of London for a week.”