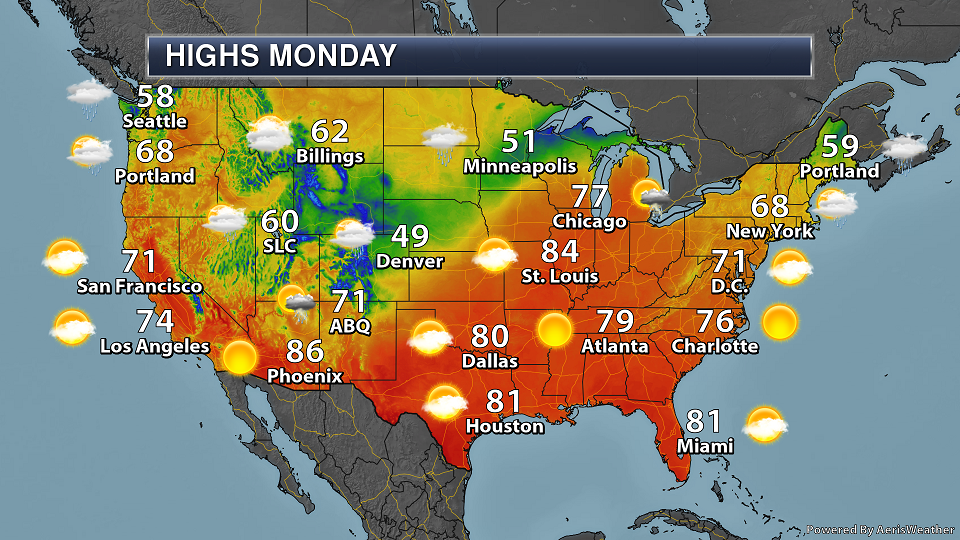 I think I’m going to put my copy of “Rainy Days and Mondays” on repeat… Widespread rain is expected to end the weekend and begin the new work week across the Upper Midwest thanks to a stalled out frontal system across the area and an area of low pressure sliding from southern Nebraska Sunday night to northern Michigan by Tuesday. The thunder threat would be greatest Sunday night, with more showery activity expected Monday. 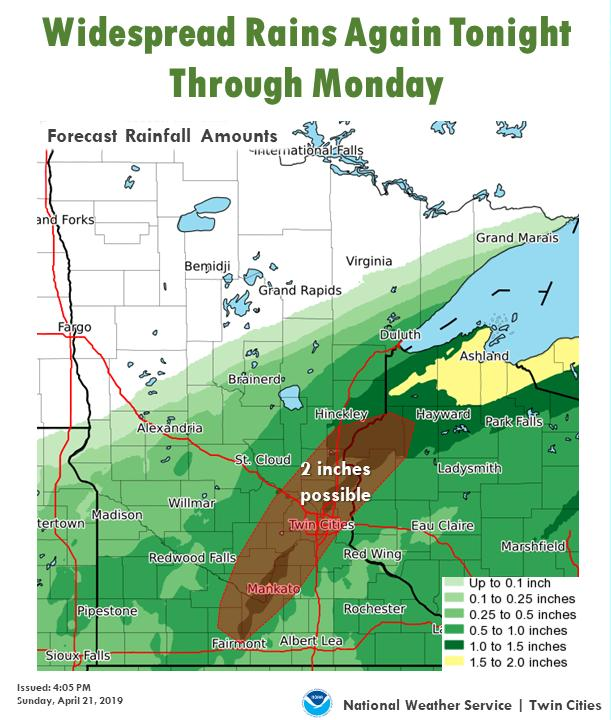 At least a half an inch to an inch of rain will be possible across a wide area of central and southern Minnesota, with the potential of up to 2″ in some areas. Some of the heaviest rain in the Twin Cities is expected to fall on Monday with at least a half to three-quarters of an inch of rain possible. This rain could help extend river flooding across the region.

Warmest Day Of 2019 So Far Saturday 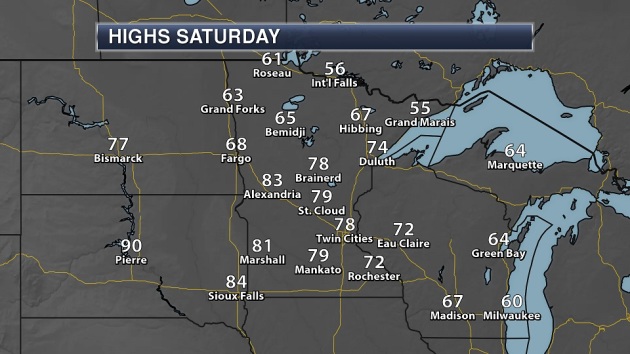 Saturday marked the warmest day so far this year in the Twin Cities, as the high climbed to 78F – the first time they’ve hit that mark since October 3rd (when the high hit 79F). Areas like Alexandria and Marshall out in western Minnesota made it into the 80s during the afternoon hours. Pierre, SD, hit 90F for the first time this year – ten days later than average. Meanwhile, highs remained in the 50s up in International Falls and Grand Marais. 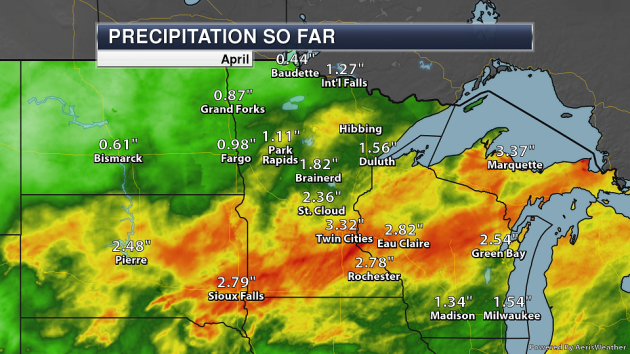 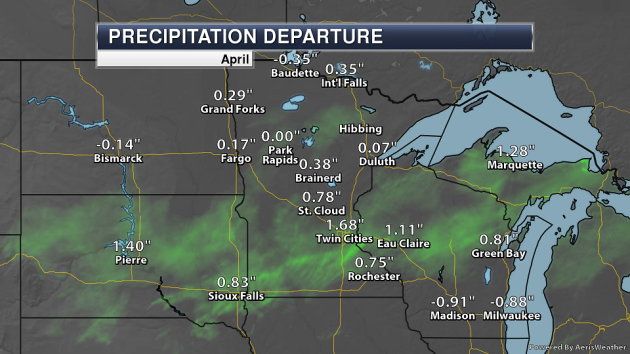 Through Saturday (so not including any of the rain that fell Sunday) the Twin Cities is up to 3.32″ of precipitation so far this month, over an inch and a half above average. If you’re searching for anywhere across the state with below average precipitation, that would be up in Baudette where only 0.44″ of rain has fallen – 0.35″ below average. 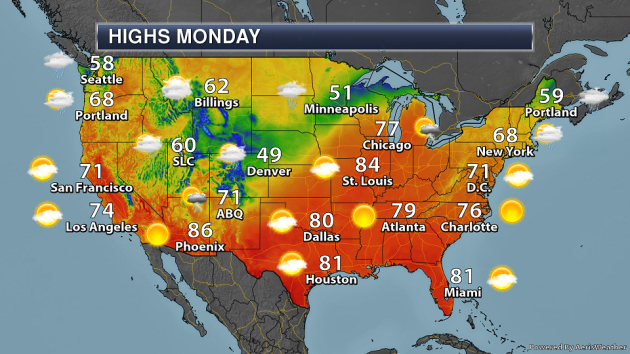 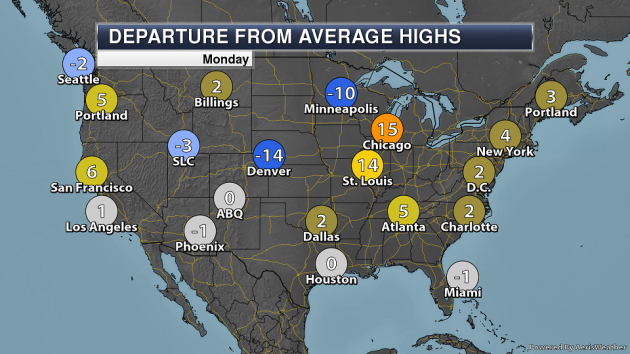 A system moving through the central of the nation Monday will bring showers and storms from the Upper Midwest and Great Lakes (throughout the day) to the Texas Panhandle (by the evening hours). Snow will be likely back into parts of the Rockies. A front extending from that system, as well as an area of low pressure moving up the East Coast, will help bring areas of the Northeast some rain. A system approaching the Pacific Northwest will increase rain chances for areas like Seattle throughout the day. 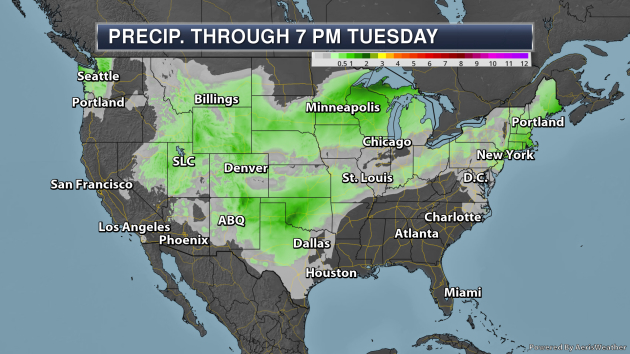 The heaviest areas of rain through Tuesday evening will be across parts of the western Great Lakes and in Oklahoma and the Texas Panhandle. In these areas rainfall totals of 1-2″ are possible.

Plastic hitches a ride on rain, snow, and wind to pollute the whole planet

More from Popular Science: “Researchers from the University of Strathclyde in Scotland and EcoLab in France spent five months collecting plastic fibers in some of the highest reaches of the Pyranese mountain range, a string of peaks that separate France and Spain. The team found that rain, snow, and wind carried microplastics at least 60 miles to this remote ecosystem previously thought to be free of garbage. This is just the beginning’ hitchhiking particles like these could potentially travel thousands of miles. The threat they pose is two-fold.”

Earth Day 2019: High temperatures, rising waters, wild weather — who is to blame? We are.

More from the USA Today: “Climate change is real and increasingly a part of our daily lives. New research and studies out in just the past six months highlight the latest facts about the human-caused shift to our global weather systems and its effects on our planet.   First among them, there’s no longer any question that rising temperatures and increasingly chaotic weather are the work of humanity. There’s a 99.9999% chance that humans are the cause of global warming, a February study reported. That means we’ve reached the “gold standard” for certainty, a statistical measure typically used in particle physics.”

More from Climate News Network: “In 2018, people died of heatstroke, roads and even rails started to melt, forests went up in flames, and power generation systems sometimes failed, not just in one region but in a number in the temperate zones and the Arctic at the same time.  Between May and July, 22% of agricultural land and crowded cities of the northern half of the globe were hit simultaneously by extended periods of extreme heat. In all, 17 countries were affected, from Canada and the US across the Atlantic and Pacific to Russia, Japan and South Korea. In Europe, temperatures in the rivers Rhine and Elbe reached such heights that fish suffocated; there were wildfires in Sweden, Latvia and Greece and record temperatures in Germany.”