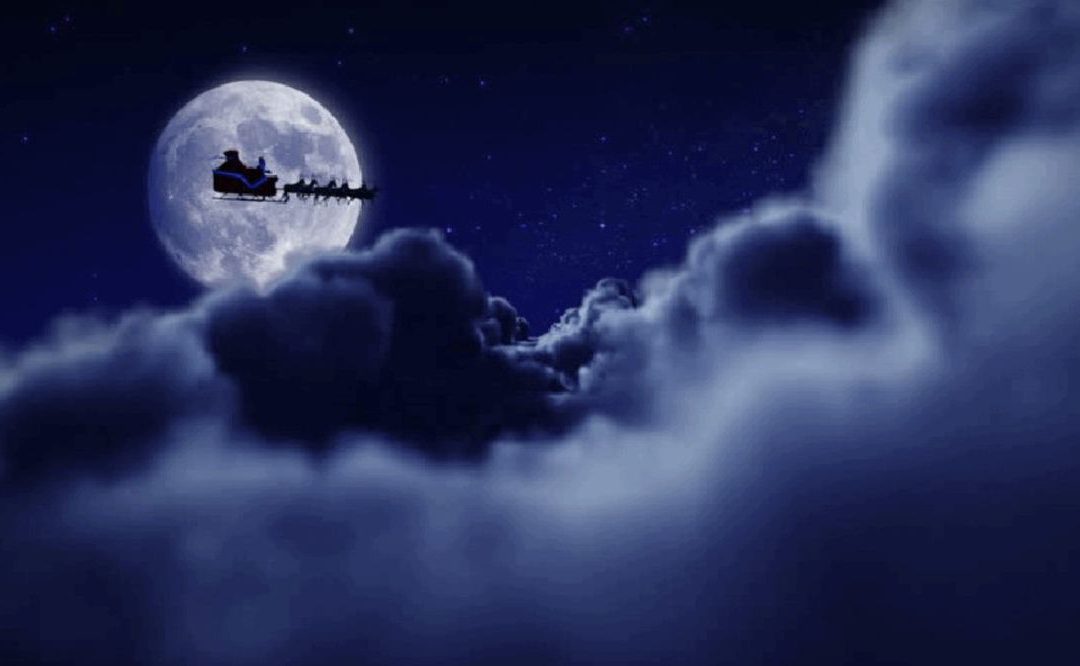 Santa Not Intimidated By A Mild December

”I will honor Christmas in my heart, and try to keep it all the year” wrote Charles Dickens in “A Christmas Carol”. Neither Hanukah nor Christmas has been cancelled, but a blizzard of infection will make this a holiday season unlike anything we’ve ever seen.<p>A friend had a good point. “If there was a blizzard on Christmas Eve most of us would stay home, not push our luck. We’d still celebrate Christmas, while keeping our loved ones safe” he wrote. Yes.

Who would have predicted this back in October? The weather is locked in a remarkably persistent pattern, one that favors a fire hose of Pacific warmth, with precious little moisture east of the Rockies. With a few exceptions next week, almost every day from now through Christmas will be milder than average. Temperatures aloft will be cold enough for snow but moisture is lacking. NOAA’s GFS hints at possible slush Christmas Eve, but I’m not getting my hopes up.

Either way winter may seem shorter. And Santa is still coming, regardless of skimpy snow cover.

So You’re Telling Me There’s a Chance? No. Not really. But we can pretend. GFS is hinting at an inch or two for parts of Minnesota, but with daytime highs rising above 32F before Christmas it may be hard keeping what little snow we do get on the ground. Not giving up yet, but it looks more beige-green than white this year.

Dreaming of a White Christmas? Dream On. The odds this year are considerably less than 50/50, but not zero, not yet. Here’s a look back at previous Christmas Days and the statistical odds of at least an inch of snow on the ground December 25, courtesy of NOAA’s Climate.gov: “Minnesota. Maine. Upstate New York. The Allegheny Mountains of Pennsylvania and West Virginia. Practically anywhere in Idaho. And of course, the Rockies or the Sierra Nevada Mountains. These are the parts of the Lower 48* where weather history suggests you want to be if you’re looking for the best chance of a white Christmas. The map (above) shows the historic probability of there being at least 1 inch of snow on the ground in the Lower 48 states on December 25 based on the latest (1981-2010) U.S. Climate Normals from NOAA’s National Centers for Environmental Information (NCEI). The background map shows interpolated values for all locations. (Interpolating means estimating unknown values using known values and physical relationships, such as the way temperature is known to change with altitude.) You can also click and zoom in to specific stations used for the interpolation...”

Cooling Back Down to Average. Normal highs now are in the upper 20s, and we may have a couple of days next week with below-average temperatures, more cool front than cold front. Winter Lite.

Shocking Weather News: Mild Bias to Continue. What’s interesting (at least to me) is that every other run GFS and ECMWF try to cool things off, only to see a different (milder) solution the next day. A pre-Christmas thaw looks more and more likely.

Christmas Cut-Off Low? I’m skeptical, but if this solution verifies a surge of wet, sloppy snow could – in theory – surge into parts of Minnesota by Christmas. A low-probability event, but not out of the question. By the way, this still looks abnormally mild for most of the USA into late December.

New Index Shows Riskiest Places for Minnesota’s Natural Hazards. There were some stats in this Star Tribune post that I had not seen before; here’s an excerpt: “…Windstorms are the number one source of power outages in Minnesota, he said. There’s no evidence that climate change is amplifying the winds, he said. Warmer winters and heavier and more frequent precipitation remain the state’s biggest climate change signals. But wetter soil means trees are more vulnerable to toppling, he said. Waage noted that the FEMA index doesn’t address all the types of flooding affecting Minnesota. It covers coastal and river flooding, but not flooding on regular ground caused by heavy rains and rising water tables. “What we’re finding is that nationally, about a quarter of flood damages are outside of flood plains now,” Waage said…”

2020 Was a Record Year for Hurricanes. Sierra Club has a good overview and a look at trends fueled by increasing warming: “…While ocean winds often have something called vertical wind shear, which can essentially cut down a developing hurricane into smaller pieces before it can build into something dangerous, NOAA data shows that since the 1980s, vertical wind shear has become increasingly weaker in areas that are farther away from the equator, setting them up for stronger hurricanes. Still, says Gabriel Vecchi, professor in High Meadows Environmental Institute at Princeton University, the most remarkable part of 2020 is how rapidly storms have progressed from mild to dangerous. “Over the past few decades, since the 1980s, in the Atlantic and around the globe, the percentage of rapid intensifications has increased,” Vecchi said. Storms were able to become dangerous so quickly this year because of how warm the ocean was in many regions of the Atlantic and Caribbean…”

2020 Billion Dollar Disasters. The extremes are becoming more extreme over time, according to a good summary at Climate Central: “According to NOAA NCEI, 2020 is the sixth consecutive year in which the U.S. has experienced 10 or more billion-dollar weather- and climate-related disasters, compared to the 1980-2019 average of 6.6 events per year. It may take some time to assess the full impact of the 2020 disasters; so far the toll is 188 lives lost and $46.6 billion dollars and counting. In the midst of the pandemic, tens of thousands of Americans were forced to flee their homes. The American Red Cross reported that it provided over 1.2 million overnight stays to evacuees (quadruple the number provided in an average year) and emergency financial assistance to 11,800 households, primarily in response to wildfires and hurricanes…”

Most Popular Holiday Dessert in Each State. Because the public demands answers. Mental Floss delves into the details: “…After analyzing last December’s Google Trends data for more than 40 holiday treats, online recruiter Zippia found that 11 states put up surprisingly high numbers for cheesecake. Most of them seem to have gone for classic recipes, but two states got creative: Hawaii favored Oreo cheesecake, while Pennsylvania preferred gingerbread cheesecake. Pennsylvania wasn’t the only state to pay homage to gingerbread’s legacy as a holiday staple. Colorado and Maryland went for gingerbread cake, and New Hampshire and Virginia both chose an even more traditional route—gingerbread men…”

December 11, 2010: A blizzard hits much of southern Minnesota. Minneapolis saw a December record 16.3 inches of snow in one calendar day and much of the metro area saw between 15 and 20 inches of snow.

December 11, 1983: Nine cars fall through the ice at the same time on Buffalo Lake in central Minnesota. There was only 5 to 6 inches of ice on the lake.

December 11, 1979: The temperature drops in Roseville from 48 degrees at 2 pm to zero by dawn of the following day.

December 11, 1916: Montevideo has its fifty-second consecutive day with no precipitation.

The Stormy, Fiery Year When Climate Disasters Wouldn’t Stop. Here’s an excerpt from The Alton Telegraph: “…With the most named storms in the Atlantic, the largest-ever area of California burned by wildfires, killer floods in Asia and Africa and a hot, melting Arctic, 2020 was more than a disastrous year with the pandemic. It was a year of disasters — and climate change from the burning of coal, oil and natural gas was a big factor, scientists said. The United States didn’t just set a record for the most disasters costing at least $1 billion — adjusted for inflation — the nation obliterated the record, according to the National Oceanic and Atmospheric Administration. By September, 2020 had tied the old record of 16 billion-dollar disasters and when the count is completed in early January, officials figure it will be 20, likely more…”

Global Rich Need to Cut Carbon Footprint by 30X to Slow Climate Change, U.N. Warns. The Washington Post (paywall) reports: “The world’s wealthy will need to reduce their carbon footprints by a factor of 30 to help put the planet on a path to curb the ever-worsening impacts of climate change, according to new findings published Wednesday by the United Nations Environment Program. Currently, the emissions attributable to the richest 1 percent of the global population account for more than double those of the poorest 50 percent. Shifting that balance, researchers found, will require swift and substantial lifestyle changes, including decreases in air travel, a rapid embrace of renewable energy and electric vehicles, and better public planning to encourage walking, bicycle riding and public transit. But individual choices are hardly the only key to mitigating the intensifying consequences of climate change…”

Americans Have Spent More Nights in Emergency Housing in 2020 Than In Any Other Year on Record. CBS News has details; here are 2 excerpts: “…The 2020 fire season is finally winding down in the U.S., but the damage is done: nearly 14 million acres have burned across the nation, about double the 10-year average and the most acres burned since reliable record-keeping began in 1983. Five of the six largest fires in California history and three of the four largest in Colorado history all burned this year…These kinds of dystopian weather events are not a coincidence — they’re a sign of human-caused climate change. Extreme weather is a part of the natural cycle, but the recent boost in both the ferocity and frequency of these extremes, scientists say, is evidence of an acceleration of climate impacts, which will only get worse as society continues to release heat-trapping greenhouse pollution...”

Global Emissions Hit New High, On Track for Increase of 3 Degrees Celsius – UN. Reuters has details: “Greenhouse gas emissions reached a new high last year, putting the world on track for an average temperature rise of 3 degrees Celsius, a U.N. report showed on Wednesday. The report by the United Nations Environment Programme (UNEP) – the latest to suggest the world is hurtling toward extreme climate change – follows a year of sobering weather extremes, including rapid ice loss in the Arctic as well as record heat waves and wildfires in Siberia and the U.S. West. On Monday, researchers at Europe’s Copernicus Climate Change Service said last month was the hottest-ever November on record. “The year 2020 is on course to be one of the warmest on record, while wildfires, storms and droughts continue to wreak havoc,” said Inger Andersen, UNEP’s Executive Director...”