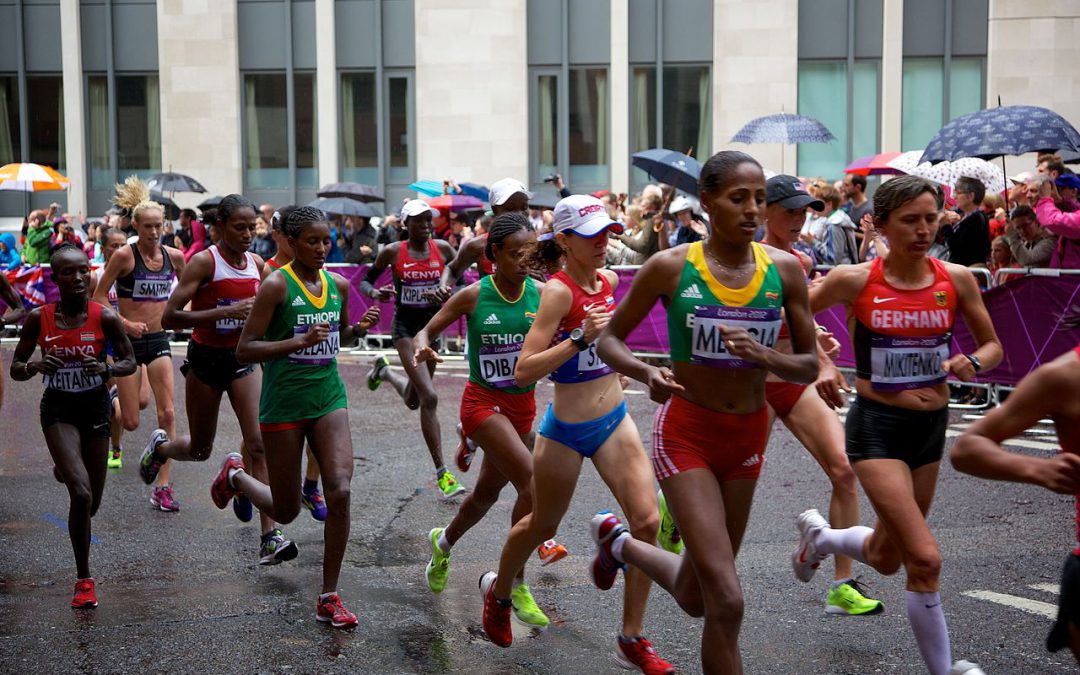 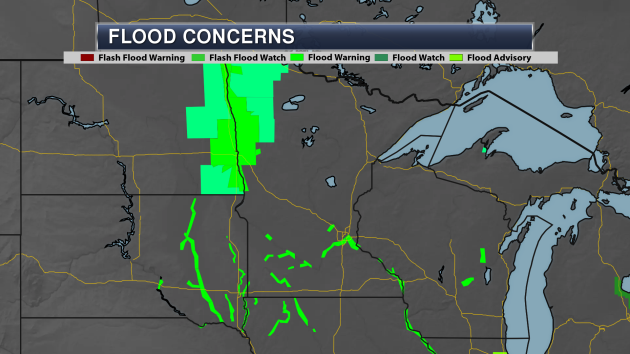 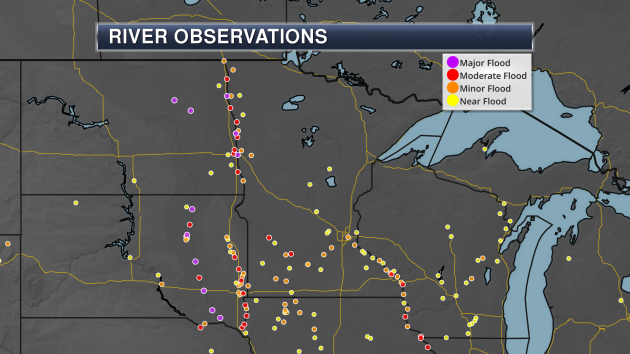 Numerous flood warnings continue across southern and western Minnesota due to the ongoing river flooding across the region. Across southern Minnesota, parts of the Minnesota and Mississippi are still in Moderate Flood Stage, with areas along the Red River in Major Flood Stage. While numerous areas are seeing rivers slowly recede, that will likely change later this week with ongoing snow melt from our recent system as well as a round of heavier rain expected. 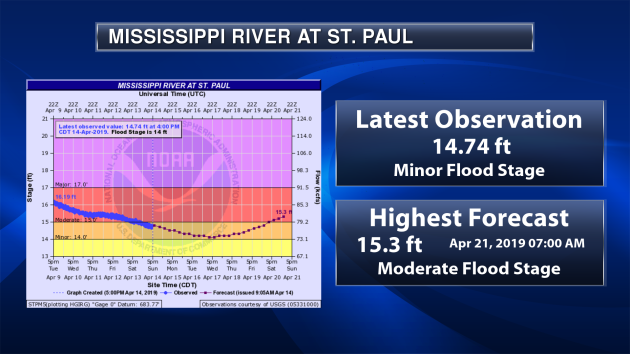 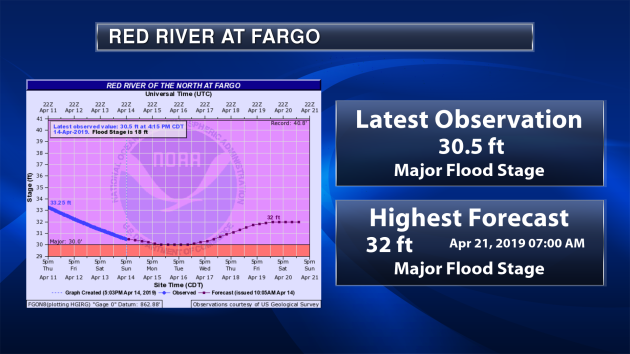 Heading over to the Red River at Fargo, it will drop to around 30ft early in the week but climb back up once again to around 32ft by the end of the week.

Update On The Snow Season 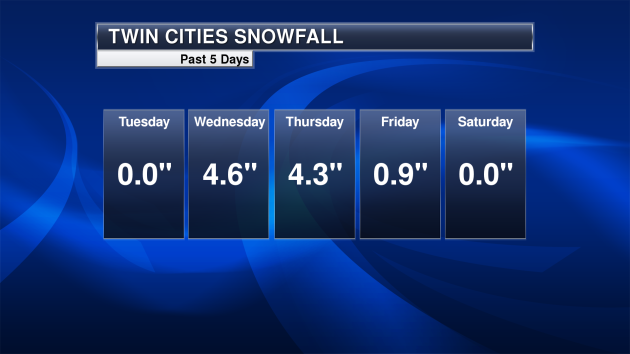 I know we all want to forget the snow that fell last week across the region, but I still thought I would remind everyone and show you the snow over the past five days in the Twin Cities. We picked up the most on Wednesday, when 4.6″ fell at MSP airport. An additional 4.3″ fell on Thursday, and 0.9″ fell on Friday as the system slowly departed the region. 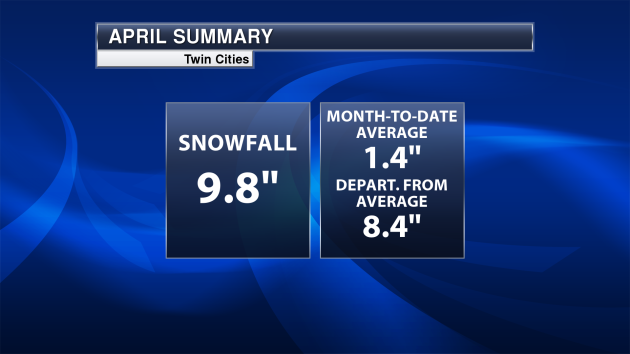 Those three days add up to the only measurable snow this month, bringing the monthly total so far to 9.8″ of snow at MSP airport. Through Saturday (the 13th), we only average 1.4″ of snow in the Twin Cities, meaning we are 8.4″ above average. That brings us into a tie for the 10th snowiest April on record, which also occurred in 1984. 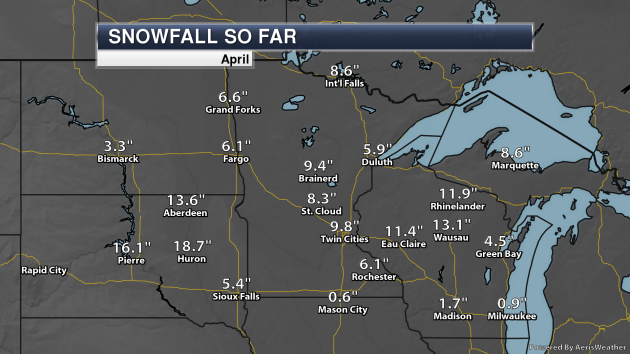 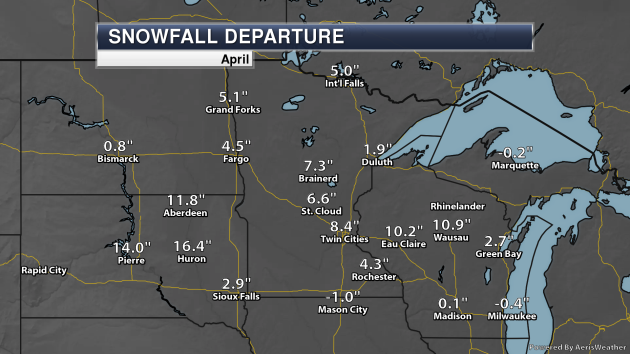 As we take a look at snow across the region at climate sites so far this month, some areas of South Dakota and Wisconsin have received over a foot of snow. Just about all the climate sites across the region on our map are above average through the first 13 days of the month – the main exceptions being Mason City, Milwaukee, and Marquette. 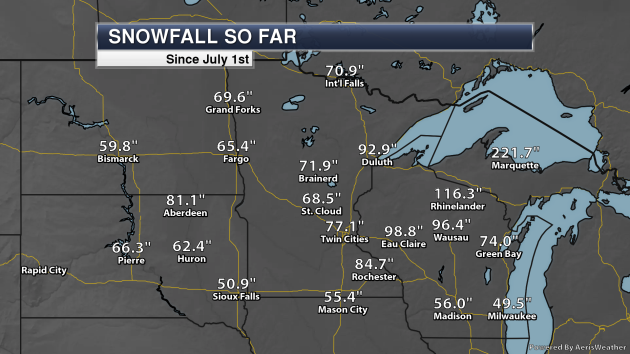 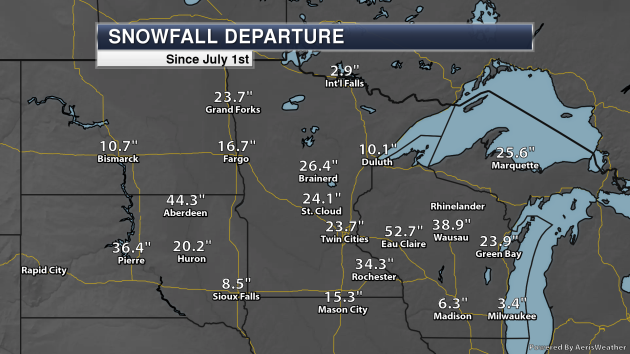 For the entire snow season, the Twin Cities has received 77.1″ of snow, 23.7″ above average and good enough for the 11th snowiest on record. Amazingly, 10th place is the 78.3″ of snow that fell last winter. 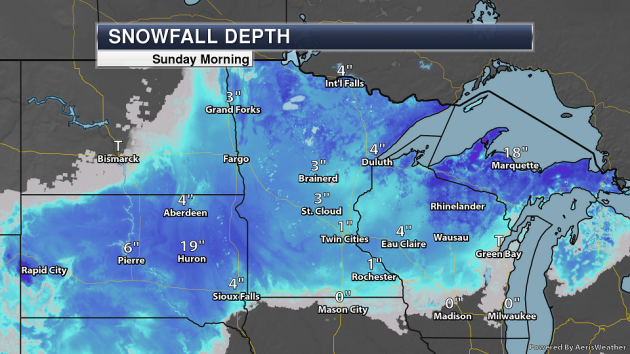 The snow depth was down to 1″ Sunday morning at the Twin Cities airport, melting away 2″ of snow Saturday. Other area reports showed that Eau Claire had 4″ on the ground, with 3″ in St. Cloud. 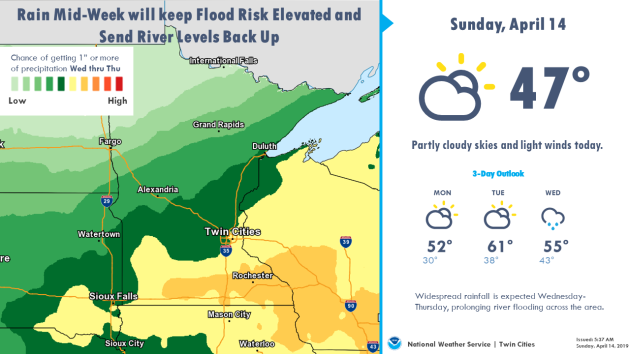 As we head toward the middle and end of the week, another strong storm system will move out into the central United States on a similar track to the one that moved through last week, bringing us precipitation across the Upper Midwest. A big difference between this system and the last one will be the temperatures – we’ll be in the 50s for highs this time vs. the 30s last week, meaning that this will be in the form of mainly rain (with maybe a little mix-over Thursday Night into Friday). Models are indicating the potential of at least 1-2″ of rain across parts of southern and eastern Minnesota through the end of next week, which will help keep the river levels elevated across the region. 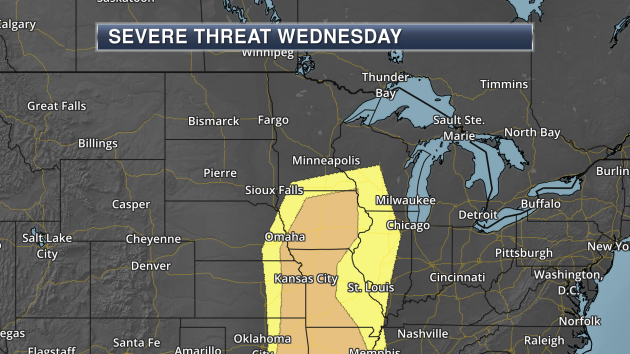 That system will also bring the potential of strong to severe storms to the region Wednesday, particularly across southern Minnesota. That is where there already is a 15% probability (in yellow) of severe weather Wednesday and Wednesday Night, with a 30% probability (in orange) as you head south into Iowa. Large hail and damaging winds appear to be the main threat, but a few tornadoes are possible, especially near the track of the surface low and warm front in parts of Iowa

Maps Looking Like Spring – Well, Sort Of
By Paul Douglas

One thing about Minnesotans: we don’t take a nice spring day for granted. Ever. Not after a winter with 77 inches of snow at MSP. If anyone asks (doubtful) 30-year average snowfall in the Twin Cities is closer to 54 inches.

Snow melt accelerates today as highs top 50 degrees; clouds building as the day goes on. Spring Fever Flu may be a thing on Tuesday as temperatures rise into the 60s. Much of the 9.8 inches of snow that fell should be gone by Tuesday evening.

After a mercifully-dry March (taking the edge off of Minnesota’s river flood threat) it appears we are heading into a wetter pattern. A significant storm may dump a couple inches of rain the latter half of the week; ECMWF guidance hints at a slushy ending Thursday night or Friday. Try not to panic – 60s return again next weekend.

2002: An early heat wave overtakes Minnesota. Faribault hits 93 degrees, and the Twin Cities would experience their earliest recorded 90 degree temperature with a high of 91. 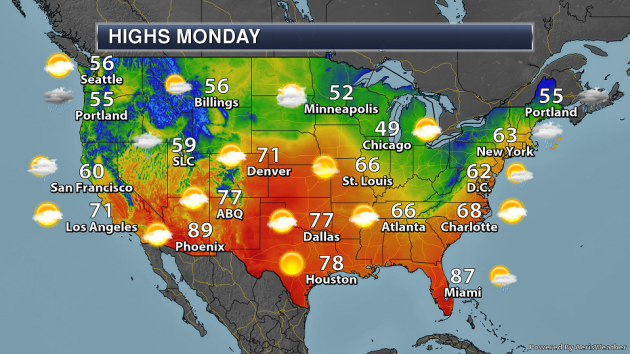 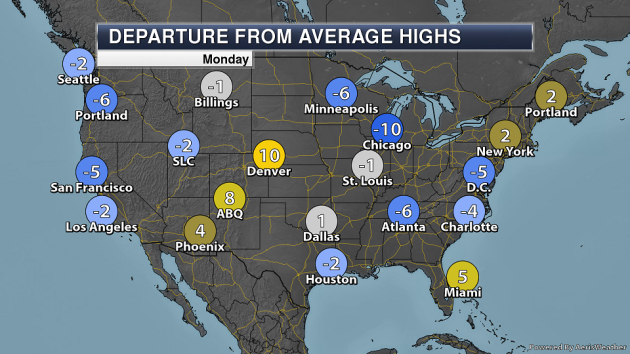 As you finish up your tax returns Monday, an area of low pressure will be moving through the Northeast, bringing some rain and storms along with it including early in the day for the Boston Marathon. A weak system moving through the Upper Midwest will bring some light rain/snow showers along with it. Meanwhile, a system approaching the Northwest will bring rain and higher elevation snow to the region. 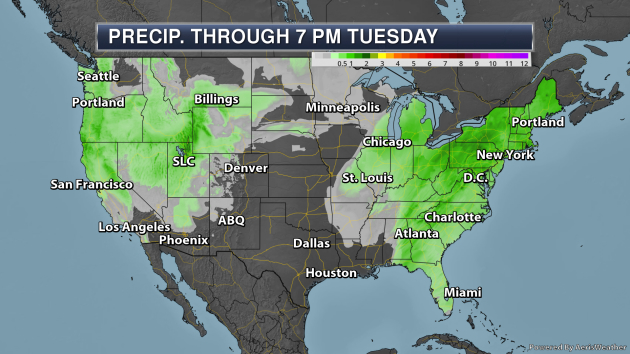 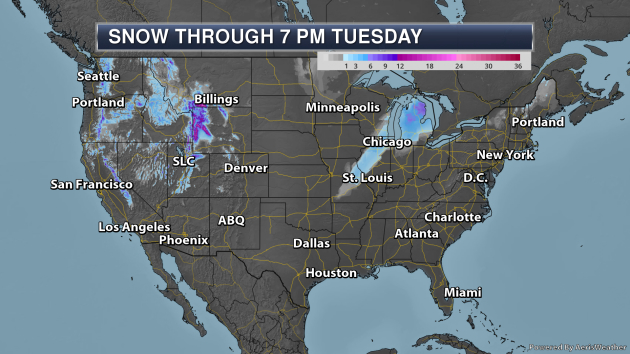 The heaviest snow will fall across parts of the western mountains, where at least a foot of snow could fall in some locations. Some additional snow will also be possible in parts of the Great Lakes.

You might not have noticed, but about 25 meteotsunamis hit the East Coast each year

More from NOAA: “It came as a surprise: A series of large waves rolled into New Jersey’s Barnegat Inlet seven years ago, dragging a group of divers up and over a breakwater. According to local news reports, the waves then crashed into a jetty where they knocked people into the water, causing injury and property damage. Eyewitnesses reported seeing waves as high as 6 feet. But how? There had been no earthquakes or underwater landslides in the area. NOAA scientists determined these waves were part of a meteotsunami, a small, weather-driven tsunami caused by changes in air pressure created by fast-moving severe thunderstorms, tropical storms, squalls or other storm fronts. The waves that hit New Jersey were generated from an intense, offshore squall line known as a derecho and were detected by more than 16 NOAA tide gauges along the East coast.”

After Colorado River Drought Plan, What’s Next for Water in Arizona?

More from the Phoenix New Times: “Even though the roller-coaster negotiations over the Drought Contingency Plan have finally come to an end, Arizona’s water problems, which are far more complex than just a Colorado River shortage, are not over. To Cynthia Campbell, they never will be, because managing water in a desert is a never-ending, ever-evolving task, both in cities and throughout the state. “We’re sitting in the middle of the desert, trying to grow a city. Which defies logic, for many people,” said Campbell, the water resource management adviser for the city of Phoenix. But whatever people think about the sensibility of cities in deserts, she said, the city is responsible for securing diverse supplies of water and ensuring it can move that water wherever it needs to go.”

Washington State Commits to Running Entirely on Clean Energy by 2045

More from Earther: “If you’re depressed by the climate politics of Washington, D.C., may I suggest checking out the other Washington. On Thursday, the state legislature officially passed one of the most ambitious clean energy bills in the nation. Washington is now committed to making the state’s electricity supply carbon neutral by 2030 and 100 percent carbon-free by 2045. The bill makes the fourth state to commit to 100 percent clean energy and adds a feather to the cap of Governor Jay Inslee who requested the bill be introduced. Inslee is running as a climate candidate for president that can get things done in the District if elected, and this bill is a very tangible accomplishment he can now point to.”