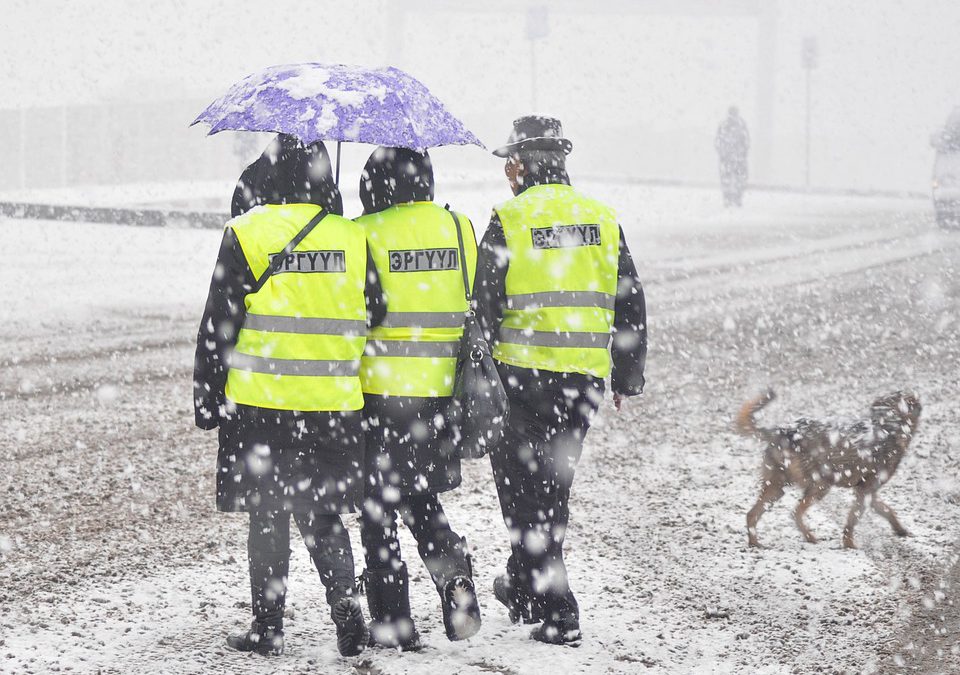 Minnesota sees its fair share of gasp-worthy weather, but don’t let anyone living in Miami, L.A. or Lincoln give you a hard time. According to FEMA’s National Risk Index, overall threats are greater across the central Plains (tornadoes), coastal areas (hurricanes), and some counties on the west coast, prone to both fire and quakes.

Since 1991, January has been the snowiest month of the year for the Twin Cities and southern Minnesota. Across roughly the northern half of the state December is the snowiest month, according to climate analyst Brian Brettschneider.

After 91 consecutive hours of clouds and fog it’s life-affirming to see the sun out. Expect this thaw to linger into Thursday, when the leading edge of colder air spins up a storm capable of dropping a few inches of snow Thursday PM into Friday. Too early for specifics, but it could be plowable.

Cold air sails into Minnesota in waves the last week of January, with a few single-digit daytime highs and subzero nights. Yawn. Par for the course in Minne-snowda.

Snow Potential Thursday PM Into Friday. It’s still premature to talk about “how many inches” but there is a potential for a few inches, perhaps even enough to snow and shovel by Friday PM, especially north/west of the Twin Cities.

Old Man Winter Pulling His Punch – Again? The trend is for GFS guidance to pull back on some of the most extreme temperature predictions for late January. A few cold days, yes, but not the severity or duration of cold slaps we’ve experienced in previous Januaries.

Numbing End to January. Which isn’t all that unusual, frankly. But the mild, Pacific “signal” is about to be disrupted by a pattern change – we’ll see if the cold air lingers or if stronger jet stream winds continue to keep the coldest air of winter bottled up to our north (most of the time).

Warm Start to 2021. We will see more cold fronts (no kidding) but a mild, Pacific bias continues to show up on our maps. Here’s an excerpt from Dr. Mark Seeley at Minnesota WeatherTalk: “The persistent warmth which started in November and carried on in December is continuing into the year 2021. For the first full week of the year temperatures have average 8 to 17 degrees F above normal across the state, with the largest deviations in northern Minnesota. International Falls has seen daily deviations as high as 26°F above normal. The largest daily deviation from normal temperatures occurred on January 4th. In fact, some daily record temperature values were set that day within the state climate network. New daytime maximum temperature records were reported from several locations, including: 45°F at Cass Lake, 40°F at Kabetogama and 39°F at Hibbing...”

Record Number of Billion-Dollar U.S. Disasters in 2020. NOAA has details: “It was an extraordinary year for weather and climate events in the U.S.: The nation endured an unprecedented 22 billion-dollar disasters in 2020. A record number of named tropical storms formed in the Atlantic, with a record 12 making landfall. The nation also had its most active wildfire year on record due to very dry conditions in the West and unusually warm temperatures that gripped much of the country...”

You Might Be Surprised About the Riskiest Places to Live in the US. I’m feeling even better about living in Minnesota these days. A post at AP and Voice of America caught my eye: “…Out of over 3,000 counties in the U.S., Los Angeles County in southern California is the riskiest place to live. That is home to the city of Los Angeles. The counties in the U.S. that are home to other large U.S. cities are risky, too. New York County, home to New York City, and Miami-Dade County in Florida have large populations, lots of buildings and homes and are close to water. Cities that are close to water are generally considered risky due to flooding. Other U.S. cities that have a high risk index are Philadelphia, Pennsylvania; San Antonio, Texas; and St. Louis, Missouri…”

Moderate Risk for Hennepin and Ramsey Counties. Why? Value of properties and infrastructure in the path of potential floods and tornadoes.

2020 Tied for Hottest Year on Record. Here’s a summary at CNN.com: “Global average temperatures last year were tied for the hottest on record, capping what was also the planet’s hottest decade ever recorded, according to new data analysis released Friday. The last six years are now the hottest six on record, with 2020 on par with 2016 as the hottest year ever recorded. The new analysis comes from the European Union’s Copernicus Climate Change Service, one of several datasets which track global temperatures and climate change impacts. Last year’s temperatures were 0.6 degrees Celsius (1.08 degrees Fahrenheit) warmer than the 1981 to 2010 average, and 1.25 degrees Celsius (2.25 degrees Fahrenheit) above the pre-industrial average…”

Renewables Account for Most New U.S. Electricity Generating Capacity in 2021. Here’s an excerpt from a post at EIA, The U.S. Energy Information Administration: “According to the U.S. Energy Information Administration’s (EIA) latest inventory of electricity generators, developers and power plant owners plan for 39.7 gigawatts (GW) of new electricity generating capacity to start commercial operation in 2021. Solar will account for the largest share of new capacity at 39%, followed by wind at 31%. About 3% of the new capacity will come from the new nuclear reactor at the Vogtle power plant in Georgia.

Solar photovoltaics. Developers and plant owners expect the addition of utility-scale solar capacity to set a new record by adding 15.4 GW of capacity to the grid in 2021...”

What Would it Take to Run a City on 100% Clean Energy? WIRED.com (paywall) outlines the difficulties and opportunities in turning the vision into a reality: “...But are 100 percent renewable cities actually … 100 percent renewable? The reality is a bit complicated—and it shows the challenges of true, “deep” decarbonization of electricity in the United States. First, shifting to clean electricity doesn’t mean that a city zeroes out its carbon footprint—residents could still be driving gas-guzzling cars or heating their homes with natural gas. Even most claims of running on “clean” electricity come with caveats: What cities actually mean is that they purchase enough electricity from wind, solar, or other clean sources to balance out the power that they use over the course of the year. For places filled with renewables, like Vermont, that’s not such a big deal. But in other areas, a city might not be using all renewable electricity in real-time. Even when the sun isn’t shining and the wind isn’t blowing, electrons still need to be flowing through the grid to keep the lights on...”

Facebook is a Doomsday Machine. Delete your account. Here’s an excerpt from a post at The Atlantic: “…The cycle of harm perpetuated by Facebook’s scale-at-any-cost business model is plain to see. Scale and engagement are valuable to Facebook because they’re valuable to advertisers. These incentives lead to design choices such as reaction buttons that encourage users to engage easily and often, which in turn encourage users to share ideas that will provoke a strong response. Every time you click a reaction button on Facebook, an algorithm records it, and sharpens its portrait of who you are. The hyper-targeting of users, made possible by reams of their personal data, creates the perfect environment for manipulation—by advertisers, by political campaigns, by emissaries of disinformation, and of course by Facebook itself, which ultimately controls what you see and what you don’t see on the site…”

37 F. high in the Twin Cities on Monday.

January 12, 2000: Snow falls in a narrow band over the Twin Cities. Maplewood receives 5.5 inches, while Chanhassen gets 12.

January 12, 1888: The infamous ‘Blizzard of ‘88’ occurs. It hit during a mild day when many children were heading home from school. They made up the majority of the 200 people that died. At the end of the storm the thermometer at St. Paul read -37.

Inside the CIA, She Became a Spy for Planet Earth. Talk about an accidental discovery of monumental importance. Here’s an excerpt of a fascinating story at The New York Times (paywall): “…The first reconnaissance satellite, known as Corona, was launched in 1960. Federal experts have put the overall cost of its hundreds of successors at more than $50 billion. An accident of fate let the fleet assess a top environmental concern — the extent to which vast expanses of Arctic and Antarctic ice were retreating. Many spy satellites orbit on north-south paths that pass close to the poles so that, as the planet turns, the vast majority of Earth’s surface passes beneath their sensors over the course of 24 hours. Thus, their many paths converge near the poles…”

Agriculture Must Be Part of Climate Change Negotiations, Says Farm Bureau. Here’s the intro to a post at Food and Environmental Reporting Network: “Although blamed for 10 percent of U.S. greenhouse gas emissions, agriculture has a “great track record” through land stewardship and biofuels in mitigating climate change, says Zippy Duvall, president of the American Farm Bureau Federation, in looking ahead to the Biden administration. “We must make sure we are at the table for discussions around climate change.” Speaking during the opening session of the AFBF annual convention, held online this year, Duvall said, “Farmers have a great story to tell when it comes to protecting our environment,” noting that roughly 140 million acres, or 219,000 square miles, of farmland are enrolled in federal soil and water conservation programs and biofuels “reduce greenhouse gas emissions by 71 million tons per year…”

Controversial NOAA Climate Officials Release Papers Making Dubious Claims. I’m shocked. Here’s an excerpt from an explainer at Capital Weather Gang: “…The papers, which were published on non-government websites, bear the imprint of the Executive Office of the President and state they were copyrighted by the White House Office of Science and Technology Policy (OSTP). “These papers were not created at the direction of The White House Office of Science and Technology Policy nor were they cleared or approved by OSTP leadership,” OSTP spokesperson Kristina Baum said in an email. The papers make controversial and disputed claims about climate science, including that human-caused global warming “involves a large measure of faith” and that computer models are “too small and slow” to produce meaningful climate simulations...”