Subtropical Storm Ana Has Formed – National Weather Outlook For May 23, 2021 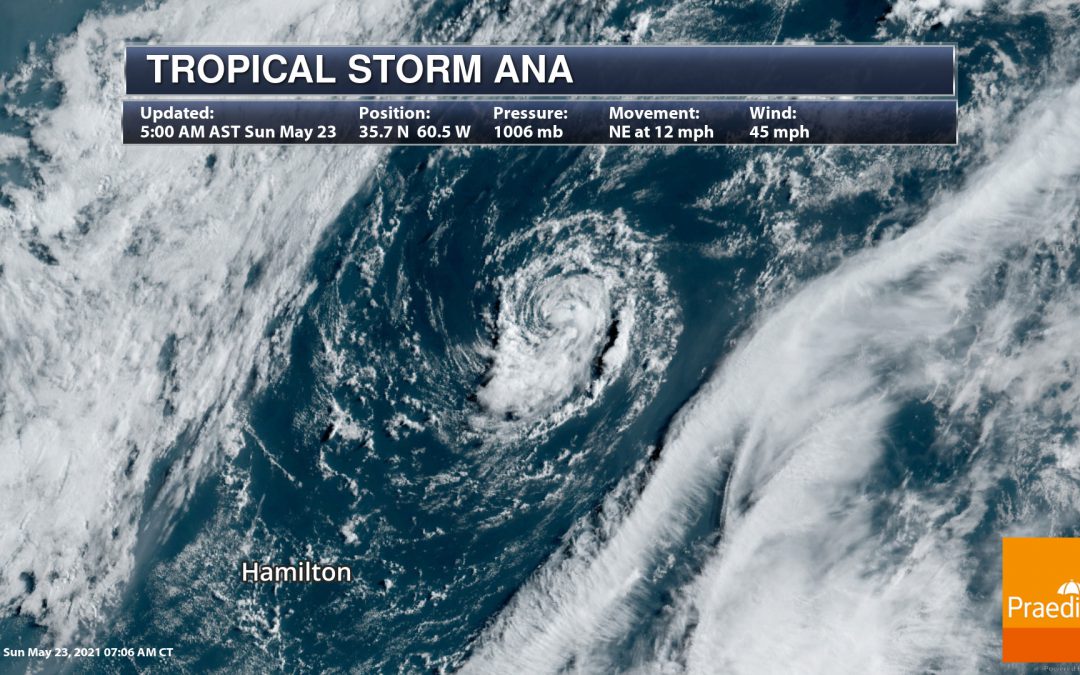 Some areas of at least 1-2” of rain will be possible the next few days across the central United States. Meanwhile, several inches of snow will still be possible in higher elevation areas out west, mainly in the Northern Rockies.

More from Yale Climate Connections: “The 2021 Atlantic hurricane season is officially off to an early start: Subtropical Storm Ana formed in the waters 200 miles northeast of Bermuda at 5 a.m. EDT Saturday. Andrea’s formation date of May 22 comes over a week before the official June 1 start of the Atlantic hurricane season and marks the seventh consecutive year that a pre-season named storm has formed. The previous record was four consecutive years, set in 1951-1954. Although the National Hurricane Center has not changed the June 1 start date of the Atlantic hurricane season, it did move the launch date of its daily Tropical Weather Outlooks to May 15 starting this year.”

More from NOAA Climate: “A slow-moving cluster of thunderstorms allowed torrential rain to fall for hours on May 17 in southwestern Louisiana and neighboring Texas. The result was precipitation totals measured in feet. Lake Charles observed 12.49 inches of rain in just one day—six inches of which fell in just two hours—making May 17, 2021, the third-wettest day in the city’s history. And that’s a history that includes multiple landfalls of incredibly wet hurricanes! Meanwhile, just over the border in Texas, Port Arthur/Beaumont, an area very familiar with astonishing rainfall totals—Hurricane Harvey dropped 26 inches of rain in one day back in 2017—observed 9.86 inches of rain, its eighth-wettest day on record. Overall, a huge swath of the region observed at least six inches of rain on May 17.”

More from Gizmodo: “The flimsy-looking but impressively tenacious Ingenuity has booked its sixth flight on Mars. Slated for sometime next week, this flight will be the first of the helicopter’s new demonstration phase, following five successful test flights that proved the feasibility of powered, controlled flight on the Red Planet. Ingenuity is currently roosting on a new airfield about 400 feet from Wright Brothers Field, from which it launched its earlier flights. It moved to stay close to Perseverance rover, which, now busy with its own mission, will no longer take photos of the helicopter’s escapades. The rover will instead focus on science, searching the rocky remnants of a Martian river delta for fossilized life.”